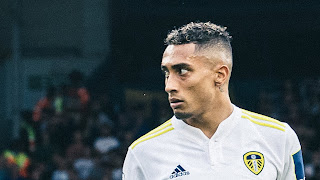 When Raphinha is scowling at Jamie Shackleton for a misplaced pass or telling off a teammate for not making the correct run off the ball, you wouldn’t necessarily guess from his body language that he’s playing football to bring joy to himself and everyone watching.

Even when speaking to Adam Pope in an interview with BBC Radio Leeds this week, Raphinha was sitting on a chair with his arms folded, an occasional sigh belying his otherwise expressionless face. A translator could be seen over his left shoulder, but Rapha’s poker face made it hard to tell if he even realised the translator was there. “I just want to be on the pitch, playing football, having fun,” he said. “I’m doing the same thing I was doing in amateur várzea games back in Porto Alegre, the same focus, always looking to enjoy and have fun doing what I love.”

Marcelo Bielsa spoke in praise of Raphinha’s amateur attitude in his pre-Brighton press conference. The word ‘amateur’ is today used to suggest sloppiness — ‘a person who is incompetent or inept at a particular activity,’ is one definition provided by Google — yet it derives from the Latin verb ‘to love’.

“To be a professional player, an important contribution is to possess a high spirit of amateur[ism],” Bielsa said. “I am referring to what a player develops when they play for nothing, without expecting any recompense apart from the victory. They are the future professional footballers, they consolidate the most important parts of that to then become professionals. Raphinha is a clear example of this, he hasn’t lost anything of what you get when you play for fun.”

In his book ‘What Sport Tells Us About Life’, the former England cricketer Ed Smith writes a chapter lamenting professionalism’s overtaking of amateurism, for burdening creative, instinctive talents. ‘I would argue there is also a pragmatic reason for retaining a splash of the amateur spirit: it is often a big part of how victories happen,’ he writes. ‘One half of sport may be about harnessing human talent, but the other half depends on setting it free. In that sense, sport is just like other forms of self-expression.’

‘Scolari said: “My priority is to ensure that players feel more amateur than professional. Thirty to forty years ago, the effort was the other way. Now there is so much professionalism, we have to revert to urging players to like the game, love it, do it with joy.” This is not romantic twaddle. It is a fact that the more important something gets, the harder it is to do well. We can all walk along a kerbstone in safety: but if the drop were not six inches but six miles, how then would we walk? Football matters too much; it matters to the players too much. As a result, the mattering gets in the way of the playing.’

There is a sweet spot, however, where amateurism meets professionalism. Raphinha is well aware football matters, which is why his feet are dancing to a samba rhythm at the same time as his eyes are staring into the soul of a defender. “Obviously today I [play] with a lot more responsibility on my shoulders, but going from the tunnel onto the pitch, it’s the same thing: I’m going on the pitch to enjoy myself and get the win, because I always want to be winning,” he told Radio Leeds. “I want to win the game and enjoy myself in the process.”

Which is easy to say when you’re talking about a footballer as talented as Raphinha. But what about the players that dragged Leeds this far in the first place? Luke Ayling is the opposite to Raphinha. While Rapha was tearing up street games and hanging out with Ronaldinho as a kid, Ayling was being told he wasn’t quick enough or strong enough to become an elite footballer, and giving up on the idea of playing in the Premier League even while playing professionally at Yeovil and Bristol City. Ayling is now a promotion hero and elevated himself to levels so far beyond his expectations he was mentioned by Gareth Southgate last season as a contender for the England squad, yet he still worries his time as an established player at Leeds could come to an abrupt end, knowing the club are now able to buy someone ‘better’ than him if they wish.

The differences between Raphinha and Ayling on the pitch seem to be the wrong way around. Raphinha is the frowning global star who just wants to have fun, Ayling is the grinning joker fuelled by the need to prove himself every week. They meet at the same merging of amateurism and professionalism thanks to the work of Bielsa, who goes to extreme lengths to programme his players’ physical and technical skills so they can carry out his game plan almost without thinking, encouraging their creative subconscious to make them do something instinctive and fun, as if they were back playing on a park as a child. Don Revie and Howard Wilkinson’s methods were similar, drilling their players with dossiers on the opposition and through repetitive training sessions, ensuring players like Eddie Gray or Gordon Strachan had the foundations around them to be able to express themselves.

“Bielsa, who was very structured, who had very mechanised movements, said that his greatest pride was when a player went onto the pitch and did something that he decided for himself,” Atletico Madrid manager Diego Simeone told Spanish newspaper El Pais in October. “Mechanisation generates a stimulus to repeat things, and that’s where the other ‘you’ [the individual] has to appear and add it to what the coaches say.”

By the time Ayling is back from injury and linking up with Raphinha down Leeds’ right wing again, United might need to prioritise winning over having fun if they remain worryingly close to the relegation zone. But according to those who know best, playing football for the sheer thrill of it can go a long way to providing the buzz of victory. After all, it’s only a game.