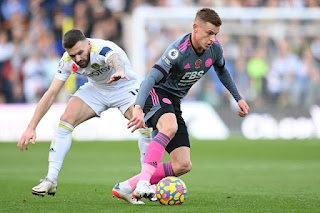 The clouds parted over Elland Road on Sunday and the summer-laid pitch was bathed in sunlight, not because Leeds United made it three unbeaten in the Premier League, but because they played so well.

Results are important and suffering just one defeat in five league outings is cause for optimism yet the 1-1 draw with Leicester City did much more for the collective mood than the 2-1 win at Norwich City.

Results can paper over cracks and mask problems but performances speak with real clarity about a side's potential direction of travel. That display against the Foxes was a good one.

There had already been signs of a recovery, of sorts, from Marcelo Bielsa's men in that block of games between the October and November international breaks. The draw with Wolves could so easily have been a win, such was the level of dominance Leeds enjoyed in the latter stages. The intensity they produced in the second half in particular was much more representative of the footballing philosophy Bielsa has brought to life at Elland Road.

Then came the Norwich fixture, an ugly must-win affair that yielded three points without bringing anything like the best of Leeds to the surface.

That the Leicester game did was timely, just before a two week break from action.

Yet another assignment understood and ticked off. https://t.co/dzqyt8Qhsf#lufc

The sight of opposition players, ones as good as Youri Tielemans, panicking under aggressive pressure, was as welcome as the sight of Stuart Dallas and Raphinha tiptoeing and one-twoing their way out of a clutch of visiting players tight to the touchline to break into open space.

This was more like it, more like Leeds and more like Bielsaball. Familiarity has bred contempt at other clubs and led to a breakdown in the relationship between fanbases and their managers but it was craved at Leeds.

The collective play, the co-ordination in both the pressing and the attacking, was a big positive and so too were individual displays.

Dallas playing like he can, again, was a good sign. If he comes back from Northern Ireland duty in similar form and in one piece, it will be a huge boost.

Rodrigo appears to be growing in both confidence and influence, taking on more responsibility and achieving an impact that simply looked beyond him after a woeful outing at Southampton. His off-field relationship with Raphinha is helping to foster an on-field understanding that allows both men to find the other when Leeds go on the attack.

The Brazilian has been brilliant, consistently, and patiently waiting for team-mates to catch up. Any improvement from him would take him to a level only the very elite ever reach, because he's almost already there at present.

Kalvin Phillips was better against Leicester than he was at Norwich, without producing his very best, but the midfielder brings with him a reassuring air of reliability. One under-par performance is very rarely followed by another with him.

Alongside him on Sunday, Adam Forshaw was a revelation. Staying fit enough to handle the upcoming 10 games in six weeks schedule is a big ask, though.

And Pascal Struijk is quickly, quietly but forcefully growing into a player for whom the bench is an increasingly unlikely option.

The defence in general is an area of strength for Leeds - Goalkeeper Illan Meslier is an excellent talent and mistakes, like the couple that crept into his last two games, rarely seem to trouble him when the next opposition attack rolls around, while Liam Cooper and Diego Llorente have been largely solid together.

With Luke Ayling, Junior Firpo, part-time right-back Jamie Shackleton and Robin Koch all to return from injury and Charlie Cresswell and Cody Drameh developing nicely under Mark Jackson in the Under 23s, Bielsa has serious depth when it comes to defensive options.

There is, of course, significant room for improvement. The three-game unbeaten run can be seen only as a platform, a start.

At the top end of the pitch is where a lot of the problems have been this season. Attacks might not have been constructed with the same fluidity but when the ball has arrived in the final third, both Daniel James and Jack Harrison have found it difficult to turn possession into chances or chances into goals.

Neither man has lacked effort, their perseverance was noteworthy on Sunday and James in particular troubled Leicester with his pace and movement, but they have lacked tangible impact and both so badly need an assist or a goal. Putting the ball in the net did wonders for Rodrigo and the same is likely to apply to the wingers.

What's more, with Patrick Bamford to come back into the side and provide a much-needed physical presence and a focal point for the attack, someone is going to have to drop out. It won't be Raphinha or Rodrigo, on current form, so perhaps whoever truly clicks into gear first will keep their spot.

For the supporting cast of Tyler Roberts, Joe Gelhardt, Crysencio Summerville and from a midfield perspective Mateusz Klich and Lewis Bate, the task is simply to take any chance that comes their way. The youngest players in that group look well capable of disrupting any previously-established hierarchy.

In all, despite a difficult start to the season, there are worse places to be than 15th. Leeds are starting to give the impression of a side in better shape than enough of their rivals to suggest the clouds might just stay away, or at least not rain on their Premier League parade.