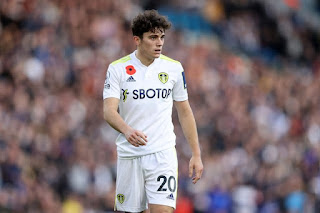 Daniel James insists he is yet to reach anywhere near his full potential as he looks to kick on in the next phase of his career with Leeds United.

The 24-year-old winger has made 10 appearances for the Whites across all competitions since his arrival, making a swift adjustment to life in the senior set up in West Yorkshire.

James arrived on summer deadline day from arch rivals Manchester United in a deal worth in the region of £25million though is yet to make a huge impact in terms of numbers, recording just one assist thus far.

Marcelo Bielsa had long-admired the wide man since his time at Swansea City in the Championship - when Leeds saw a deal to sign him in January 2019 fall through at the final hour with James having completed paperwork and a medical at Elland Road.

Leeds, though, returned this summer to finally land their target to add him to the armoury for a second campaign in the Premier League.

James has played as a winger and through the middle amid an ankle injury to last season's top goalscorer Patrick Bamford, leading Bielsa's press from the front in imposing fashion due to his pace.

His finishing and decision making in the final third, though, has been somewhat hit and miss but he is fully confident that in time his end product will come good.

"I’ve not reached my potential yet," James told FIFA.com.

"I’m getting a lot more game time now [at Leeds] and I’ve obviously got my own goals [to achieve]. I’ve got so much more I can improve on, so much more to give. Hopefully I’ll show that in the coming years.

"I do enjoy pressure, I thrive off it. I’m happy to take it."

James is currently away with Wales amid the November international break, who face Belarus in World Cup qualifying action tonight before a clash with Belgium on Tuesday.

Rob Page's men have already guaranteed themselves a play-off place in Group B and have an outside shot of earning an automatic spot should they win their final two games and receive help from elsewhere.

"There are not many teams – 13 going from Europe – and to be among those teams would be an absolute privilege. We definitely have the team, the players and the spirit to make it. It’s down to us."