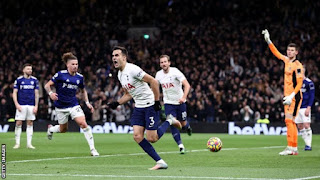 The hosts failed to manage a single shot on or off target in a lacklustre opening 45 minutes with the determined visitors by far the better side.

There were some boos from the home fans as Tottenham left the pitch for the break, but Conte's side were much improved after the restart, twice hitting the woodwork early on.

First, Harry Kane - anonymous in the first half - broke clear of the defence and his powerful low effort squirmed under Illan Meslier and hit the base of the upright before Song Heung-min's heavily-deflected strike hit the crossbar.

The equaliser arrived just before the hour mark when Pierre-Emile Hojbjerg curled into the far corner after good work by Lucas Moura.

Tottenham kept up the pressure and the turnaround was complete in the 69th minute when Eric Dier's free-kick deflected off the wall and onto the post, but Sergio Reguilon was there to poke in the rebound and score his first Premier League goal for Spurs.

The home side then closed out the game to secure a win that moves them up to seventh, four points off the top four.

A tale of two contrasting halves

When Conte emerged from the tunnel before the start of the game there was applause from the home fans as they greeted their new manager for his first game in the league at the Tottenham Hotspur Stadium.

But that was all they had to cheer about in a significantly below-par display in the first half.

Meslier was untroubled in the Leeds goal as Tottenham's wait for a shot on target in the Premier League passed the four-hour mark. Kane, fresh from scoring seven goals in two international appearances, never looked like adding to his solitary Premier League goal as he again struggled to make an impact at club level.

Leeds, in contrast, looked like the team of last season as they attacked with pace and precision and belied their injury problems to put in a dominant performance.

But the game turned on its head in the second half as whatever Conte said at the interval worked wonders.

Spurs came out looking considerably more alert, quicker to every ball, more direct with their attacks and could have won by a bigger margin but for the woodwork. Son also sent a dipping strike just wide in the closing stages.

There is still work to be done, most notably finding out how to get the best out of Kane.

But the manner in which Conte was able to rectify what was so wrong in the opening period bodes well for Tottenham fans' hopes of success under the Italian, who is yet to taste defeat since replacing Nuno Espirito Santo.