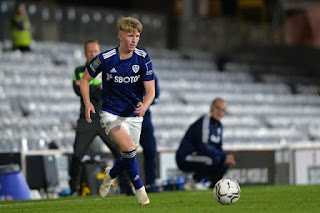 The 19-year-old Scot was handed a first senior appearance for the Whites in September at Fulham, stepping off the bench in the League Cup clash at Craven Cottage to score in the penalty shoot-out win.

McKinstry had to bide his time for inclusion under his manager at Elland Road, having made the move south of the border from Motherwell to West Yorkshire aged just 16.

The switch from Fir Park to Leeds has been beneficial and was seen as a long-term investment in LS11 - arriving with the raw talent of a wide man before moving inside to learn the ropes in a more central role under development boss Mark Jackson.

Motherwell academy director Steven Hammell has now backed his former player to succeed with the Whites after taking his first step into first team football in recent months.

"He has the right attitude and temperament. He's surrounded by a lovely family who are very supportive of him.

"If a team in England come and offer anything you want as a young player, then of course it's difficult to say no. All we can do is progress what we have here and sell our story.

"I'm sure Stuart will do wonderful things and become a household name in the next three or four years - but I don't want to put too much pressure on the young man.

“He'll do well because of his attitude."

Asked about how tough it is to keep hold of Motherwell's best young emerging talents, Hammell added: "It's the nature of the game. If you have talented players at any level of the game, other clubs are going to want to come and take them off you.

"Brexit has made that even more difficult. Where English clubs would go to Scandinavia or Europe for players, they can't do that now.

"Their first port of call is here. It's brought challenges. At the start of every week you have a list full of requests asking to come to lots of different games.

"Sometimes they don't send a request and they just show up anyway! Then you begin to get enquiries about your player from these teams.

"It has happened to us quite a lot over the last few years. It's a sign that we are doing well but we want to make sure we show the kids that there is a pathway here.

"You can establish yourself as a professional at Motherwell, make your way into the first team and get 50-100 games under your belt.

"There's lots of examples of boys leaving too early to chase something a bit more difficult, and falling short."