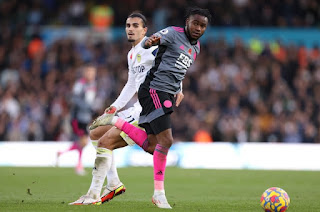 Pascal Struijk says he had to get used to the intensity of playing left-back for Leeds United very quickly.

The Whites were held to a 1-1 draw by Leicester City in the Premier League on Sunday afternoon at Elland Road ahead of the current November international break.

Struijk was selected to start the match in a back three before moving to an unfamiliar role on the left side of a back four as Bielsa matched up the Foxes.

United are enduring a number of injury problems at first team level which forced the 22-year-old to find a new home against Brendan Rodgers' outfit.

Struijk's only previous experience of playing as a full-back came in the club's Under-23s side as he rose through the Thorp Arch ranks.

He did, though, put in an assured performance for the Whites - bursting back and forward down the flank - even if it took some swift adjustment on his behalf.

"It's very intense," Struijk said post-match of his newfound position.

"I had to go very high up the pitch and get back quickly. I had to get used to that, so at times I was a bit sloppy. I think I did alright. I did play a couple of times for the Under-23s there but it's nothing compared to this level [in the Premier League].

"I'm happy to get minutes in. I think I would do things better in the game if the opportunities came again."

Raphinha opened the scoring for Leeds in the 26th minute but Bielsa's side were pegged back immediately by a Harvey Barnes wondergoal.

United pushed on and saw Jack Harrison, Dan James and Rodrigo all miss chances before having to settle for a point after Ademola Lookman's potential winner was ruled out for offside by VAR.

"I think we deserved a bit more," Struijk continued.

"We created so many chances. They did as well but I think we were dominant. To concede however many seconds after we scored was a bit unlucky.

"We've been getting our old form back. We haven't been picking up the wins but the football is getting better along with the effort the team is putting in."