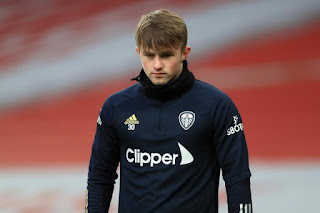 United's sole reply in the Premier League Two Division One contest came from a Tyler Roberts spot kick whilst Joe Gelhardt returned from a recent minor setback to play half an hour in the second half.

Exciting 15-year-old midfielder Archie Gray also started the fixture in which Wales international Roberts lined up just ahead of Sam Greenwood in the front line.

Roberts saw an early shot from the edge of the box saved before blasting just wide from a corner.

But Chelsea went ahead in the tenth minute as the giant centre-back Xavier Mbuyamba outjumped Jeremiah Mullen to head home a corner.

Leeds looked to respond and a fine crossfield pass from the excellent Leo Hjelde released Max Dean whose looping ball into the area was scrambled clear.

Roberts then twisted and turned on the edge of the area before firing an effort narrowly over the top left corner.

Chelsea, though, doubled their lead in the 31st minute as more set piece issues cost the Whites dear.

This time former Whites loanee Baker sent in a free-kick from the right hand side and his delivery was met by the towering Mbuyamba to head home his second goal of the game.

United's afternoon so far was summed up as set-piece specialist Greenwood sent a free-kick well over the bar.

But Leeds got themselves back into the contest four minutes before the break when 15-year-old Gray was blocked off just inside the area as he looked to connect to Hjedle's fine through ball.

Roberts stepped up to take the penalty and coolly sent the 'keeper the wrong way by slotting home into the bottom left corner.

The half then ended with United clearing two set pieces before a vital tackle from Nohan Kenneh cleared danger in the second minute of added time.

Gelhardt and Charlie Allen were then introduced during the interval as Roberts and Greenwood made way but Chelsea came flying out of the blocks and squandered several golden opportunities to bag a third goal, the chances often the result of sloppy Whites defending.

Josh McEachran robbed Kenneh to allow Xavier Simons to get a shot away which was saved by Kristoffer Klaesson.

From yet another set piece, Mbuyamba flashed a header just wide and seconds later Simons blazed over from close range after storming through the middle.

Klaesson then produced a good save to tip a rising shot from Brodi Hughes wide before Hjelde saved the day with a vital block to a Jude Soonsup-Bell shot.

Leeds somehow weathered the storm and went close with 20 minutes left when Lewis Bate played in Amari Miller whose shot was palmed away by the Blues keeper.

Gelhardt was then booked for a firm challenge on the edge of the box and the young forward was subbed with 15 minutes left as Sean McGurk was introduced as the final change.

McGurk twice went close to playing in Dean who moved upfront to replace Gelhardt as McGurk played on the right.

Gray then saw a dipping effort saved from the edge of the box but the game was settled in bizarre circumstances in the 89th minute as Chelsea were awarded a soft penalty for a foul by Allen on substitute Joe Haigh.

Several players looked on in disbelief as the referee pointed to the spot and former Whites loanee Baker stepped up to smash home his penalty into the bottom left corner, sending Klaesson the wrong way.

The goal knocked United's youngsters flat and Chelsea then went close to bagging a fourth in stoppage time, Klaesson denying Mbuyamba a hat-trick of headers with a save from a corner.