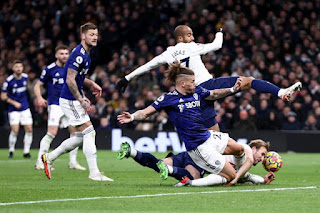 Leeds United fell to a narrow 2-1 defeat at Tottenham Hotspur in the Premier League on Sunday afternoon - here's what supporters had to say about the game post-match.

@Garymarshall_85 Two of unluckiest goals to concede. Didn’t deserve to be beaten today for me. Thought we were superb considering injuries. Play like that and we will be more than fine! #TOTLEE #lufc #alaw #mot

@road_lowfields Played well with under-strength side. We're going to be alright. No worries. #lufc

@LUFCpearson27 Despite the loss, relatively happy with that. Frustrating to lose when we were so good 1st half but think it bodes well. James, Harrison, Struijk and Phillips all superb. #lufc #TOTLEE

@jasiowni Can’t help but be bitter about that loss. 2 very lucky goals IMO in that second half. Praise Spurs all you want, they were good in the second half, but that’s against a Leeds side marred by injury #lufc #mot

@LaMMasKid Deserved at least a point with the circumstances but that’s football, we go again #lufc

@Keirangraham19 Well, a game of two halves simple as that… Thought we was excellent in the first half but the second we just couldn’t get up to speed, I don’t think the subs helped at all as we completely lost the midfield when klich went off, onto brighton MOT!

@JoJrl We won the first half and they win the second. Pleasing and encouraging first half. Couldn't keep our shape or possession in the 2nd. Our attack is definitely our best form of defence. Frustrating to let the lead go #lufc

@LeedsUtdRyan Don't get how Leeds went from being brilliant in the first half to poor in the second half.. Another defeat for us.. We need wins.. We need to stay in this league.. #lufc #mot

@FocusOnLeeds Excellent first half, control and good build up. Second half Spurs started to press a lot higher and we couldn't cope. Squad so thin and with key players missing we just don't have any game changes. Just got to keep going and try and get points on the table. #LUFC

@cgsneal Very annoying to lose to a goal like that. Deserved something from the game, but faded second half.

@LewisDeighton17 Very unfortunate to lose. Deserved a point at the very least. Won’t take anything away from the lads or that performance. Onto Brighton. #LUFC

@nathlufc23 On a positive note, the way we played that 1st half with a depleted squad was outstanding. If we play like that with Bamford, Raphinha etc back, we'll be just fine. Spurs just had too much for us that 2nd half #lufc

@brittain_joe Great performance. Didn’t deserve to lose. Coped well with so many injuries! Onto the next one #lufc