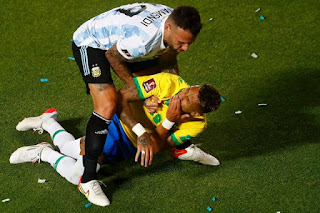 Leeds United winger Raphinha battled on after suffering a bleeding lip to play 69 minutes for Brazil in a full-blooded World Cup qualifier against Argentina in San Juan which ended goalless.

Brazil were without Paris Saint-Germain star Neymar due to a thigh injury so Matheus Cunha and Vinicius Jr started alongside Raphinha in the front line.

The Whites star again lined up on the right, Cunha playing through the middle and Vinicius on the left.

Brazil had already sealed their qualification for next year's World Cup and approached the game sat six points clear of Argentina at the top of the group.

Argentina began brightly but Raphinha could have been played in from a rapid Brazil counter attack in the 13th minute.

The Whites ace was bursting through on the right but Fred opted to play in Vinicius whose heavy touch took the ball out of play.

Five minutes later, Vinicius was in again with Raphinha on the overlap but the striker opted to shoot and scooped the ball over the bar.

Cunha's attempted lob from the halfway line then sailed just over and it took Raphina until past the 20-minute marker to get his first notable touches of the ball.

In the 27th minute, the winger cut in from the right and unleashed a curling shot from 20 yards out that flew well wide and over.

Good defending from Marcos Acuna then kept out Raphinha near the byline as the ball was ushered out for a goal kick.

On another counter from a corner, Raphinha's curling pass with the outside of his foot which looked to play in Vinicius was also ushered out.

Shortly after, the Whites winger was clattered by Acuna on halfway but Raphinha then produced a moment of brilliance to skin Acuna and make his way into the box.

The Leeds ace was eventually dispossessed and was caught by Nicolas Otamendi's elbow which left him with blood on his face.

Raphinha was clearly angry but was picked up off the ground by Otamendi.

The Whites winger then played on with tissue hanging out of his mouth to try and stop the bleeding.

As the half time break loomed, De Paul went close for Argentina with a curler that 'keeper Alisson was forced to tip wide.

Tackles were flying in as the game heated up, Lucas Paqueta and Leondro Paredes both booked after a scuffle near halfway.

In the second minute of added time, Alisson then got away with dropping a cross before Fred escaped punishment for a late tackle in the box and the half ended goalless.

Raphinha emerged with his lip cleaned up for the second half and the winger was tackled by Otamendi two minutes after the restart as he looked to make inroads down the right.

A few minutes later, Raphinha took a free kick some 30 yards out and went for goal but the ball sailed well over the bar.

On the hour mark, another Raphinha free kick from the left was swung into the box and was cleared to Fred who came the closest yet to opening the scoring when looping a volley against the bar.

And Raphinha's day was done by the 70th minute as boss Tite took off the Whites star and brought on Ajax winger Antony as is first change.

Anthony was booked seven minutes after coming on but a game that featured seven bookings when there could have been more ultimately featured no goals, Alisson denying Messi with a strong save in the last minute.