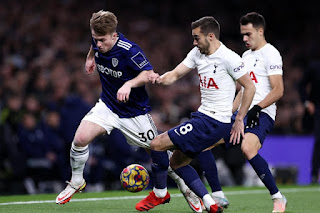 The Whites forward was given a chance to impress by head coach Marcelo Bielsa in Sunday's 2-1 defeat to Tottenham Hotspur at White Hart Lane.

Gelhardt was handed a first top flight start of his Leeds career in the capital as he led the attack amid a host of injuries.

Bielsa was without seven players for the trip to the capital with forward options Patrick Bamford, Raphinha, Rodrigo and Crysencio Summerville among those missing.

Joffy, as he is affectionately known, made his debut from the bench against Wolves last month and his impact was felt instantly by winning a late penalty in the 1-1 draw at Elland Road.

The 19-year-old was this time selected from the start by his manager and impressed in front of a 60,000-strong crowd in London, particularly during the first half when the visitors enjoyed dominance.

United took the lead through wide man Dan James - his first goal for the club since his summer deadline day arrival - on the stroke of half-time but were undone by goals from Pierre-Emile Højbjerg and Sergio Reguilón to leave empty handed.

"He is probably early in his development because Raphinha would normally play in that area but he’s like a human wrecking ball," said Redknapp of the former Wigan Athletic academy graduate's abilities.

"You see him on the pitch, he made a real difference. I like him, he’s really exciting. He’s fast, he’s aggressive, he gets on the ball, takes people on. Once he gets into the box he loves it and where he can cause most of his damage."

Former Leeds striker Robbie Keane also revealed he had been pleased by what he had seen of the striker so far.

"He certainly looks like he’s got a bit," Keane echoed.

"He has a bit of personality about him, he puts himself about and when he gets more experience, a few more games, more composure in front of goal.

"Sometimes in football you have to take your opportunities; one of Leeds’ best players in Raphinha is out injured so go and make yourself known."