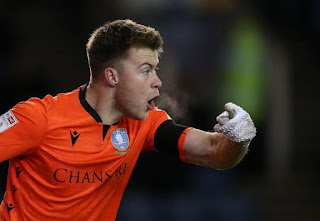 It was under Evans that the current Sheffield Wednesday goalkeeper got his first opportunity at Leeds, in April 2016.

Though he failed to add to that single appearance before Evans departed at the end of the season, the current Gillingham manager saw the potential in the young Northern Ireland custodian.

Reflecting on his time at Elland Road while Cellino was in charge of proceedings, Evans admits that his public praise for Peacock-Farrell and how far he could go in the game annoyed the Leeds supremo.

However, that did not go down well with the owner as Cellino felt that Evans’ words meant that he would need to pay Peacock-Farrell higher wages.

“I gave Bailey Peacock-Farrell his debut at Leeds United, he is a young man that I know well”, Evans was quoted as saying by Kent Online.

“I upset Massimo Cellino by saying Bailey would play for his country publicly because he thought he was going to have to pay him more in wages!”

Peacock-Farrell is under contract to Premier League club Burnley, but is currently on a season-long loan spell in League One at Sheffield Wednesday.