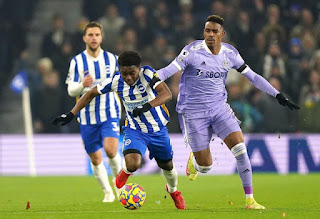 At the end of an arduous journey, Leeds United fans watched an even more arduous game. A 0-0 draw was not what they came to Brighton and Hove Albion for, even if it was more than the performance deserved.

Now, though, comes a huge week. Consecutive home games against Crystal Palace and Brentford – much more winnable than the rest of a devilishly difficult December, are only half of it. Bottom-of-the-table Newcastle United also have consecutive home games and theirs are against the other sides in the relegation zone. Burnley and Norwich City are within striking distance of Leeds’s points.

So what shape are the Whites going into it in?

Take Kalvin Phillips, hobbling at the end of the first half and speaking to the medical staff when he came off at the interval – so when he did not return, we assumed that was why.

It added to the impression that all is not as it should be.

Patrick Bamford and Luke Ayling – the latter due to play for the under-23s today – cannot return from injury soon enough, not only to lift this team in a physical sense but psychologically.

Dan James was an ineffective centre-forward in Bamford’s absence. That Rodrigo, who looked like he needed substituting long before full-time but was unable to come off because all three changes had to made much sooner, had little impact either hardly helped. Raphinha, on whom so much depends, produced the sort of performance you fear when a player lines up for kick-off in tights.

Opponents out-doing Leeds’ intensity is becoming a theme where once it was very rare. These players have been subjected to a high-octane coach for a long time and maybe they are unable to keep going to the well, much as they want to.

Midfielder Adam Forshaw, who had two unwanted years off from much of Bielsa’s training-ground barking, showed almost as much energy as his team-mates put together.

But intensity can also drop with morale.

If a weariness is understandable if not forgivable after such a long time, their apparent confusion at the start of games seems counter-intuitive.

Tactically, Leeds are largely reactive, trying to find the best solution to the opposition, rather than setting challenges. Even when playing well, it can take 10 or 15 minutes to look comfortable. On Saturday, they reshuffled shortly before the 20th minute.

It is one thing against a team with a clear method like Antonio Conte’s Tottenham Hotspur. There, Bielsa set his side up brilliantly with Phillips outstanding at centre-back. The problem with those teams comes when they change to try to win the game, as Conte did – and did.

Teams like Brighton do not give you that luxury. Graham Potter is one of the most tactically flexible managers around, but more pro-active than Bielsa. On Saturday, he picked a 4-2-3-1 and Phillips was again Leeds’ centre-back, Diego Llorente at right-back.

This time it did not work.

Leandro Trossard picked the ball up too easily in the hole, Jakub Moder was dangerous on the left wing and Tariq Lamptey outstanding on the right until a player who recently returned from injury ran out of steam.

What made dealing with it harder was when Leeds got the ball, too often they quickly gave it back.

Stuart Dallas dropped to right-back, Llorente come inside and Phillips into midfield. Trossard and Moder were quietened (not silenced), but the problem down the left remained acute.

Facing Lamptey, so rapid but with an end product, was hard enough, but Leeds had Junior Firpo at left-back.

He was booked after five minutes for fouling Lamptey and when the youngster sped past him and crossed in the eighth minute, and Neal Maupay fluffed a copper-bottomed chance, it already seemed a question of when, not if, he would be substituted.

Pascal Struijk’s absence had been a surprise anyway given how well he played at left-back in the last few games, but Bielsa revealed he was not fit for 90 minutes. He came on in midfield at half-time, whilst Jamie Shackleton allowed Dallas to try to contain Lamptey from his third position of the match.

Leeds were better in the second half, but still second best.

They did have chances to win it – three for substitute centre-forward Tyler Roberts, who had two shots saved by Robert Sanchez seconds apart – but Solly March also came off the bench and shot against the post with Illan Meslier, who earlier made two good saves, beaten. Asked about the mood in the camp, Bielsa said: “It wouldn’t be natural for us to be happy or satisfied given the succession of results.”

This team has raised hopes recently with good matches or halves unrewarded, then demoralised with nights like Saturday. Despite that inconsistency, results are pretty consistently disappointing.

“The equilibrium of the team is broken very easily and you have to pay a lot of attention, realise why this happens and try to resolve it.”

This week would be a really timely one to do that.