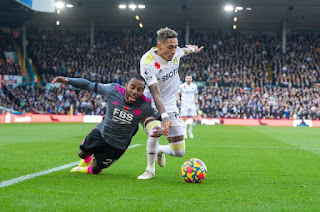 Adam Forshaw replaced Jamie Shackleton in Marcelo Bielsa’s starting line-up, returning from an extended period of injury to make his first Premier League start for Leeds, while summer signing 19-year-old Lewis Bate was named in the Argentine's squad for the first time.

Meanwhile, the visitors were strengthened by the return of Wilfred Ndidi to Brendan Rodger's starting eleven, having recovered from a hamstring injury which has sidelined the midfielder since September.

Leicester withstood a pair of strong chances for the hosts within the first five minutes, with ex-Whites shot-stopper Kaspar Schmeichel palming away Jack Harrison’s looping shot before parrying Kalvin Phillips’ header from the corner that followed.

The hosts’ offensive dominance was rewarded 26 minutes in as Raphinha won a free kick 20 yards out. This time, Schmeichel couldn’t keep the ball out as Raphinha’s dead-ball effort glided unchallenged into the far post to put the Whites 1-0 up.

But Leeds’ lead was short-lived as Leicester struck back immediately from kick-off. With space on the edge of the area, Harvey Barnes stepped away from Diego Llorente and placed a beautiful effort into Illan Meslier’s top corner.

Barnes’ goal took the sting out of Leeds’ charge and the teams went into the break level at 1-1.

The Whites passed up a gilt-edged chance to go ahead just after the interval when Phillips' corner flick-on fell toward Harrison, unmarked, at the back post, but the winger couldn’t control the ball, which deflected off his thigh and over the bar.

Leicester City looked to have scored on 66 minutes, when Jamie Vardy glanced a corner toward the back post for Ademola Lookman to poke home, but the goal was chalked off after a VAR check found Lookman offside.

Raphinha and Dan James shot well over in the closing stages, while Çağlar Söyüncü and Ndidi fired wide for the visitors as both teams fought to claim all three points, but neither side could find a winner and the game ended 1-1.