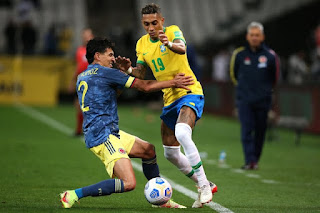 Leeds United winger Raphinha helped Brazil officially qualify for the Qatar World Cup with a 1-0 win over Colombia in the early hours of Friday morning.

The 24-year-old was handed his fourth cap and just his second start for his nation after linking up with Tite's squad for the first time last month.

He made quite the impression during his opening three performances for Brazil, bagging two goals and two assists in total.

Raphinha was selected on the right of a front three that included Paris Saint-Germain's Neymar and Manchester City's Gabriel Jesus at the Neo Química Arena in Sao Paulo.

The Whites wide man completed 64 minutes in what was a tough and tense affair in front of 22,000 spectators as the hosts extended their World Cup qualifying unbeaten run to 28 games.

He failed to register a goal or an assist in the game but enjoyed 38 touches, completed 16 passes, attempted four crosses and won five duels on the night - though lost possession on 14 occasions.

It took Brazil until the 72nd minute - after Raphinha's substitution - to break the deadlock in a physical and hot-tempered game of very few chances.

Lyon's Lucas Paquetá produced a clever first-time finish from inside the box following a one-touch flick forward by Neymar to bag the only goal of the game and settle the tie in the second half.

With the three points the Selecao earned their place at next year's mid-season World Cup, which begins in late November in Qatar.