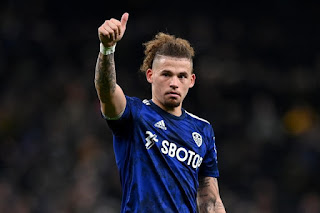 Kalvin Phillips lamented a lack of concentration from Leeds United in the 2-1 Premier League defeat at Tottenham Hotspur.

Marcelo Bielsa’s side travelled to White Hart Lane on Sunday afternoon to take on Antonio Conte’s outfit and left North London beaten by a second-half fightback from the hosts.

Dan James bagged his first goal for the club as the winger gave Leeds a deserved lead heading into the half-time interval.

Spurs, though, upped the tempo they were severely lacking in the opening 45 minutes and took all three points thanks to efforts from Pierre-Emile Højbjerg and Sergio Reguilón.

United were hit by the absences of key figures Raphinha and Rodrigo ahead of kick-off as the duo joined the likes of Patrick Bamford, Luke Ayling, Jamie Shackleton and Robin Koch on the sidelines.

Despite the lack of senior firepower at Bielsa’s disposal, Leeds put in an impressive first-half performance in the capital before coming unstuck after the break in disappointing fashion.

“In the first half we played some good football. We played at our tempo and right at the end [of the first half] we got our goal,” Phillips reflected post-match.

“We went in at half-time really confident. In the second half we knew they were going to come out and want to press us - they did that well. We couldn’t really play the same way as we did in the first half.

“We’re very disappointed. It’s just a lack of concentration in some parts [of the game] that hurt us. We needed better game management. We were 1-0 up in the second half trying to push for a second goal.

“There were times where we couldn’t really play out and I think in those moments you probably need to kick it long and soak up the pressure. There were times we did that well but, like I said, it’s probably a lack of concentration that has cost us.

“We are missing some very good players in our team, some very important players. We’re missing Pat Bamford and Luke [Ayling]. Rapha was out with Rodri too. It’s not an excuse, we did come here and play some good football.

“Everyone looks at Rapha as a special talent. I think Jack Harrison did well and caused some problems. I think we needed that. When Rapha misses a game somebody needs to take on the responsibility and I think Dan [James] and Jack did that.

“I’m not one for panicking. The way we play football we’ll eventually stack some more points on the board. We’re a very fit team. I think the results will come. We just need to be more decisive and concentrate a bit more.”

Amid the injury issues Bielsa opted to utilise Phillips in defence to combat the Spurs attack along with handing youngster Joe Gelhardt a first Premier League start.

The England international was tasked with helping keep international captain Harry Kane quiet, which he did to good effect for the majority of the afternoon.

“To be honest I don’t know why he did it,” Phillips said over Bielsa’s decision to put him in the backline.

"We wanted to be more defensive with their attacking threat of both Harry [Kane] and Son. So we had Diego [Llorente] on Son and me and Liam Cooper went man-for-man marking.

“I think it worked well in the first half and even in parts in the second we did well against Harry.”