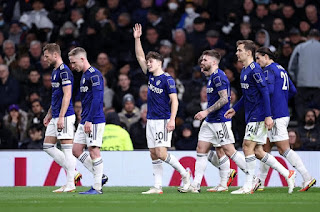 There might be better squads in the Premier League than the one Antonio Conte has inherited at Tottenham Hotspur, but in the surrounds of their £1bn state-of-the-art stadium it was always going to be a case of the haves and the have-nots, even before the Leeds United team was revealed.

When the starting line-ups emerged, Conte had Harry Kane and Son Heung-min and Marcelo Bielsa did not have Raphinha or Rodrigo.

The absence of two first-team players would not unduly trouble many top-flight squads, yet Raphinha’s bout of illness removed Bielsa’s main man and Rodrigo’s minor foot issue took a shed-load of experience out of the attack.

A fresh headache for Bielsa, along with the continued absence of Patrick Bamford, Luke Ayling, Robin Koch, Jamie Shackleton and Crysencio Summerville, presented fresh opportunities for others, namely teenager Joe Gelhardt who made his first Premier League start up front.

Seven of Mark Jackson’s Under-23s on the bench and the presence of 15-year-old Archie Gray gave the squad a distinctly youthful look, but the team that started had plenty of nous and experience, albeit not a huge amount in the Premier League.

A defence that did well for the vast majority of the draw with Leicester City and a midfield with as solid a look as Bielsa can produce from his squad boasted many of what you would call his first-choice starters.

What the squad was missing was goals. The 20 men named on the team-sheet had managed just two in the Premier League between them prior to the Spurs game.

Raphinha has carried more than his fair share of responsibility in the Leeds attack this season and Rodrigo was growing in influence before the international break.

Without them, there was a huge onus on Mateusz Klich and wingers Jack Harrison and Daniel James to supply Gelhardt up front and, on the face of it, given the quality of the opposition, there was a mountain to climb.

At 19, Gelhardt does not have the little tricks of the trade that come only with game time and seasons of first-team involvement, but what he has is the impetuousness of youth.

Unfettered by Leeds’ goalscoring issues and their injury crisis, young players play with a freedom that allows boldness and it was seen in his early actions - a first dribble that won an attacking free-kick just outside the area inside 50 seconds, a flick over the head of a defender and the refusal to be bullied off the ball before teeing up James on the right, and a backheel pass to put Stuart Dallas into space.

Leeds, too, played with freedom and intensity, as if their only concern in the entire world was the football and how quickly they could get it and move it.

They pressed ferociously early on and almost reaped the rewards when a turnover high up the pitch presented Dallas with a shooting chance that he fizzed just wide.

Spurs, for their part, spent the first quarter of an hour looking somewhat dazed, with no more than a couple of attempted counter attacks that were rebuffed by a solid Leeds backline.

Kalvin Phillips was at the heart of it, helping to shut down Kane and then feeding Adam Forshaw, who got Leeds playing forward and played a big part in the way they dominated possession.

It took 22 minutes for the hosts to create anything remotely dangerous, Son’s burst of pace drawing Diego Llorente and Liam Cooper toward him before he squared to Kane in the area, Phillips in the right place to deal with the threat.

Spurs had a few moments, a cross that Kane was eyeing up hungrily before Cooper flicked it away the best of them, but so too did Leeds. Forshaw’s rising strike from a long way out did not miss by much.

The physicality of Phillips and Forshaw’s tidiness in the middle gave Leeds a sturdy base from which to play, controlling the game.

All that was lacking was a good cross, wingers Harrison and James getting into good positions without producing end product. When that changed on 44 minutes, Leeds found themselves deservedly ahead.

Harrison’s quick feet took him away from a challenge, his low cross required just a touch and James stole in at the back post to provide it.

The home fans’ boos that greeted the half-time whistle were in stark contrast with the delirium in the away end.

Conte himself had the look of a man close to booing and the early stages of the second half hinted that he had not held back in the changing room.

Spurs finally started to create and when Phillips misjudged a bouncing ball, Kane was able to steal a march on Cooper only to find the post, via Meslier.

Leeds cranked up the pressure in response, James forcing a save from Hugo Lloris amid a succession of corners that caused varying degrees of issues for the Spurs defence.

Yet, when Spurs broke out, they posed danger that had been entirely missing in the first half, Son firing a volley off the body of Llorente and onto the crossbar.

A pair of Gelhardt efforts tested Lloris, but it always felt like a goal was coming at the other end and when Kane was able to free himself of Phillips to find Son, Reguilon was in acres of space to fire in a cross that fell to Lucas Moura.

Meslier went chasing the Brazilian but the ball went to Pierre-Emile Hojbjerg and the goalkeeper had too much ground to cover to get back across and save the Dane’s shot.

The goal appeared to change the game further in Spurs’ favour, space opening up for them in possession, more space than Leeds could afford to give and it allowed the hosts’ ball carriers to cause an increasing number of problems.

Moura’s dart towards the area won a free-kick from Cooper right on the edge and it brought a second goal. Eric Dier’s effort was deflected onto the post, leaving Meslier with little chance of preventing Reguilon from crashing in the rebound.

Spurs made their own luck and Leeds appeared to have none. To their credit, though, Leeds’s comeback attempt was swift and spirited.

Gelhardt swung on a ball in the area to shoot goalward, Kane blocking it with his arm, which was too close to his body to be considered penalty worthy.

But, with Forshaw going off, replaced by attacker Tyler Roberts, Leeds struggled to build from the back, Meslier left with little option but to chip balls towards Harrison, who couldn’t beat Davinson Sanchez in the air. In the final stages, it was almost futile to try and work out who was playing where for the visitors as Bielsa tinkered and tailored his midfield without finding the necessary fit or a way back into the game.

In the end, the haves had the points. What Leeds have, when fully fit, will be good enough. Until then, Bielsa must continue to do the best with what he has.