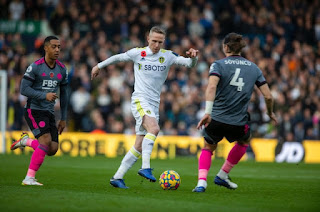 Adam Forshaw has revealed he is loving life back in the heart of Leeds United's midfield under Marcelo Bielsa.

The 30-year-old made his first top flight start for the Whites on Sunday afternoon in a major milestone amid his long-term injury recovery.

Forshaw had been sidelined for the best part of two years with an ongoing hip problem that ruled him out of United's Championship promotion along with the club's entire debut campaign in the Premier League after 16 years away.

The central midfielder has been taking steps towards a full return - primarily in cup competitions - though enjoyed a 13-minute cameo in last week's win over Norwich City in league action.

Bielsa opted to hand him an opportunity from the beginning against the Foxes, as he starred in the 1-1 draw at Elland Road in an impressive performance after 771 days since his last league start.

"I'd like to say a massive thank you to Rob Price and his team. It's everyone, really. The strength and conditioning coaches and the manager with the way he has managed me throughout the summer.

"My family and my wife too with helping keep me busy on days when it has been tough at times. I'm just thankful to everybody. I was loving it. I was blowing in the second half, I had a little bit of cramp after 70 odd minutes but it's in the bank now.

"I'm just looking forward to the next game."

United dominated much of the game against Leicester, taking the lead through Raphinha in the first half before being pegged back by Harvey Barnes less than two minutes later.

"The performance was really good, so we're slightly disappointed we didn't get three points," Forshaw continued.

"I think if we continue to play like that with the intensity, [winning] second balls and battle in midfield we'll pick up points fine. It's high intensity as everyone knows. We're quite exciting to watch at times I think, so it was an open game.

"We maybe could've ran away with the points. Jack [Harrison] was unfortunate with his miss but we kept pushing and it just wasn't to be. I think he's seen it late. You get a lot of those flick-ons from the near post if you arrive there like theirs, which was ruled offside."