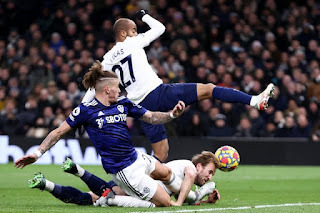 Whites head coach Marcelo Bielsa has outlined his positional plan for Leeds United star Kalvin Phillips after a dazzling display from the Yorkshire Pirlo at centre-back.

Phillips has made enormous strides under Bielsa as United's holding midfielder, the 25-year-old now a regular starter for England and amassing 19 caps in the 14 months since making his international debut last September.

Phillips has also been deployed in the middle of the park by Three Lions boss Gareth Southgate, often as part of a double pivot and usually alongside Declan Rice but also in tandem with Jordan Henderson and Jude Bellingham.

Bielsa, though, has occasionally also fielded Phillips as a centre-back and the Yorkshire Pirlo effectively lined up as United's sweeper in last Sunday's Premier League clash at Tottenham Hotspur.

Phillips was put in the role to drop deep and keep tabs on England international captain Harry Kane who endured a frustrating first-half in which United took a 1-0 lead into the break.

Spurs then rallied to leave with a 2-1 victory and Phillips returned to the midfield as Bielsa looked to combat the Tottenham fightback, ultimately to no avail.

Bielsa felt Phillips was United's stand out performer at Spurs during his moments at centre-back but says the Whites Academy graduate will always be best as a holding midfielder, the position Bielsa will try to keep him to.

"I think at Leeds his natural position will be a defensive mid," said Bielsa of Phillips.

"That is the place where you most see Kalvin’s qualities and of course I will attempt that or try that he plays the majority of his minutes in that position.

"In the game against Tottenham he was our best player in the moments that corresponded with him playing alongside Cooper and Llorente following Kane when he dropped deep.

"We had talked about who we thought was the best to adapt to Kane to drop deep and it was Phillips.

"It is a method that is very clear in Tottenham, Kane drops and Kane does the diagonal from the left to the centre and we solved that with Philips and Llorente paired up and with those two players and with Cooper waiting as a free man.

"That worked very well and nothing that allows a player to shine should result in it being uncomfortable for him.

"Now from my point of view, the best of Phillips, you will find it when he plays in the middle of the pitch.

"With respect to his position in the national team, it doesn’t correspond for me to have an opinion.”