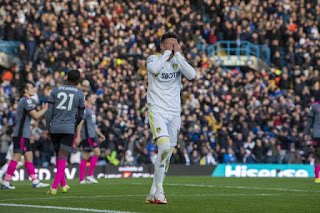 Marcelo Bielsa was absolutely right to call it “a very beautiful game to watch” but for Leeds United fans it must have been hard to know whether to be infuriated or invigorated by yesterday’s 1-1 draw with Leicester City.

A brass band played Marching on Together beforehand to get Elland Road in the mood but what really got the juices flowing was the quality of attacking football the home players contributed to a game more than worthy of the live television coverage it did not get. The fans did not just watch, they actively contributed.

They responded as Leeds built a second-half head of steam by further cranking up the pressure, twirling their scarves and roaring encouragement. You felt their team was bound to prevail.

In the end, the Whites were the length of Ademola Lookman’s boot away from losing a game where they had twice as many shots as high-quality opponents and played the sort of intense football we have not seen enough of from them so far this season.

The Premier League is cruelly unforgiving of teams that do not take their chances or drop their guard for a matter of seconds. Leeds did both.

“They looked a lot more like the team able to construct, had good recovery of the ball, generated possession, created danger and had a higher percentage of dominance of the game,” said Bielsa, more capable of a fair assessment of his own side than most managers are.

If Raphinha’s fifth goal of the season was slightly fortunate it was luck he and his team had well and truly earnt in the opening 26 minutes.

The free-kick the winger won was soft, and his delivery surely intended as a cross but when Rodrigo failed to stretch to it, Kasper Schmeichel, who had to wait to find out if he would, was unable to stop the ball curling inside his far post. At last, the scoreboard was a fair reflection.

The very start had been anything but encouraging, Diego Llorente’s error around 35 seconds in and shortly after it was revealed he had been drafted into Spain’s squad for their upcoming World Cup qualifiers, letting Lookman in only for the forward’s touch to let him down.

But once that was out of their system, Leeds overflowed with energy. Rodrigo’s weak shot did not tax Schmeichel but Jack Harrison’s as he cut inside did, and needed to be well tipped wide by the goalkeeper, who then had to save Kalvin Phillips’s header from the corner.

Phillips had Adam Forshaw for company on the latter’s full Premier League debut for Leeds, turning what would normally be a 4-1-4-1 into a 4-2-3-1. As well as the extra insurance it provided the defence, it also gave Rodrigo a bit more freedom behind Dan James and he linked well with Raphinha, as bright as the pink socks Leicester wore with their dull grey shirts.

In the 16th minute the winger nutmegged Harvey Barnes, played a one-two with right-back Stuart Dallas then released Rodrigo, only for Schmeichel’s outstretched leg to stop the move ending at the feet of James.

A goal looked on the cards. The problem was, as soon as Leeds scored it, they switched off just long enough to be punished.

Apart from Pascal Struijk mopping up well from left-back midway through the first-half, Leeds had not really been troubled since the opening stages but they ought to have learnt when Leicester were last here how good they are at throwing sucker punches.

The second half started in the same dozy manner as the first, a Liam Cooper backpass inside the first minute bobbling past Illan Meslier but crucially played wide of the post.

Then it was back to it, foot to the floor again.

Harrison won a corner with a tremendous cross but somehow shot over with his thigh from yards out when Phillips helped the ball to him from it. When he had a strike blocked, James’s follow-up was wide. Rodrigo fired straight at the goalkeeper.

Every attack turned the terrace volume up a notch. Leicester were clinging on.

James curled wide after a corner, Rodrigo rippled the side-netting with a volley from Dallas’s cross.

After 15 minutes of onslaught, Leicester began to find their feet, breaking the game up with free-kicks and substitutions and forcing Leeds to rethink by changing from the three-man forward line to the pairing Bielsa’s team-sheet seemed to anticipate.

Tielemans’s 62nd-minute cross nearly found either Jamie Vardy or the net, but was instead met by Meslier’s gloves. Five minutes later the goalkeeper was beaten, only for video assistant referee Peter Bankes to draw his lines for Stockley Park and rule that Lookman was offside.

Leeds never really rediscovered their momentum. Meslier had to come off his line to tackle Tielemans after Cooper’s poor touch and Caglar Soyuncu shanked a shot with Phillips throwing himself in front.

Leeds were hoping for a 90th-minute penalty when the ball struck Daniel Amartey but had already had one helping hand from Bankes. They could do with helping themselves a little bit more.