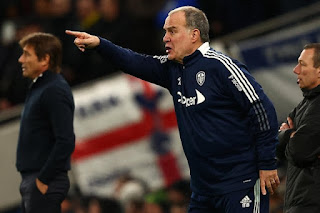 Marcelo Bielsa says he will only add more players to his Leeds United squad if they are better than what he has already got at his disposal.

Leeds United were beaten 2-1 by Tottenham Hotspur in north London on Sunday evening after losing Raphinha and Rodrigo ahead of kick off.

Raphinha is understood to have been sidelined by an illness while Rodrigo is believed to have missed out with a minor foot injury.

The result leaves them with just two wins from 12 league games.

"Despite their absentees, Leeds produced a dominant first-half performance to deservedly lead at the interval."

A significant injury crisis has been one of the factors behind their slow start to the season but Bielsa insists he or the club will not rush into any transfer decisions in January.

"Players have a level for any position, which costs us a minimum between 20 and 30 million pounds," said Bielsa following the defeat at Spurs.

"So in an institution like Leeds that has invested a lot on players in the second year and also the third year to imagine that we could increase the power of our professional group, it shouldn't be evaluated without looking at the economic possibilities.

"It is true we haven't been able to count on Koch for a long period of time due to a problem with his pelvis, Bamford's ankle has also been a long injury.

"Ayling's knee has also been a long injury, after there are injuries that are shorter and more common so I have the feeling that we should only bring in players if they are better than the ones we already have."

Bielsa understands the demand from some fans to recruit more players after Leeds named seven Under-23s on their bench against Tottenham while also handing Joe Gelhardt his first Premier League start.

Academy player Archie Gray, who is only 15, was part of the travelling party to the Tottenham Hotspur Stadium but was not named on the bench.

"It is normal to demand an investment in the team," added Bielsa.

"Hopefully we can resolve this [lack of players] with the recovery of the players that are absent and it is also by chance that the injuries that we pick up are all by players that play in the same position in the same period."