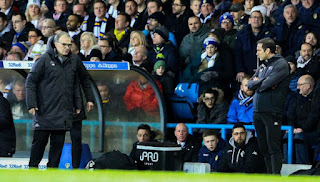 Jody Morris has lifted the lid on the incredible events that led to the infamous ‘spygate’ scandal between Derby County and Leeds United — and why Frank Lampard was left bemused after receiving a private phone call from Marcelo Bielsa after the incident.

Lampard had taken his first managerial role with Derby after being appointed in July 2018, bringing his close friend and former Chelsea team-mate Morris with him to Pride Park as an assistant.

The pair had worked together as youth coaches at Chelsea while gaining their coaching badges and felt they were equipped to take on their first job in the Championship.

But nothing could have prepared Lampard or Morris for the events that occurred in January 2019.

Police were called to Derby’s training ground on Moor Farm after a man was spotted hiding in the bushes watching the team while they were preparing to face Leeds United in two days time.

Morris, speaking on the Off The Hook podcast with Jimmy Bullard, has since said that they were unaware that they had been observed until police alerted them to the man's presence.

“We were out on the training pitch going through actual tactical stuff," he said.

"We were playing Leeds the next night and all of a sudden, a police car came into the training ground. Police officers jumped out of the van and two policeman walked onto the pitch.

“Everyone was thinking the same thing, that 'I hope it hasn’t got anything to do with me’ or my family or anything like that. And he’s [the policeman] just gone and said ‘I’m really sorry, but we’re getting reports that there’s someone in the bushes over there’."

While the police went over to investigate the motivation behind the man’s attempts to get into the ground, Morris said the players and staff were unable to train.

"So all the players stopped and we had to wait until the policemen went in and we were standing out for ages,” he said.

“We couldn’t get going because the police were worried. And all of a sudden, they come back and they’ve arrested someone in the bushes, he’s had bolt cutters and everything. We didn’t think too much of it.”

When the news reached them that the man, incredibly, had been deployed by Leeds United to spy on them, Morris described how he and Lampard were left staggered by the findings.

“Frank rung me and went: ‘Mate, you’re never going to believe this," he recalled.

"You know that guy at the training ground with the police car? They’ve taken the fella back to his car and opened the car up… and the car’s registered to Leeds United’.

“And then there was like a Leeds tracksuit in the background and he went ‘Leeds are spying on us!’ And I said ‘Surely not!’"

It quickly emerged that Bielsa had instructed his staff member to monitor Derby’s training session so he could gather as much as information for their upcoming fixture, which they went on to win 2-0 at Elland Road.

Relations were tense between the two clubs in the build-up to the match and Morris recalled the moment where Bielsa, in a phone conversation between the two managers, explained his actions — leaving Lampard feeling completely baffled.

“Later on in the evening, he gets a number ringing him and gets another shout from Derby saying Bielsa’s trying to call him,” Morris continued.

"So Frank then answers the phone and Bielsa goes: ‘Just to let you know, everything that happened at the training ground was us, Leeds United, me with my staff. I take full responsibility and if you want to talk about it to the press, I have no problem. It’s how I work, where we’re from’.

“So Frank goes: ‘Hang on a minute, you’re telling me that you’re spying on us training? Really?’

“He literally admitted it. As you can see, he doesn’t do a lot of interviews in English and I wasn’t there when it happened. But you can imagine how it went, he was trying to relay it in broken English to Frank and he had to keep asking him questions."

Leeds were fined £200,000 after Bielsa admitted spying on his opponents during a bizarre presentation to the media, showing how his team set up and the preparation he puts into games.

Unlike the media's general fascination with such a rare insight into how a manager sets up his team, Morris was unimpressed: “We then see that he did a presentation with the press and starts talking about stuff that everybody [every team] does.

"There is a load about the details, but he was just showing that they watch videos of the other team.

"Some of the hours he claimed he spent watching the videos of the other teams, we then processed it and said there’s not enough hours in the day."

Under Lampard, Derby reached the Championship play-offs after finishing the season in fifth place and, as fate would have it, the two sides were pitted against each other in the play-off semi-finals.

Leeds once again displayed their dominance with a 1-0 win in the first leg at Pride Park and their fans had taunted Lampard with chants to 'stop crying' about the scandal.

But it was the Midlands outfit who progressed after a stunning comeback at Elland Road in the return leg, coming from two goals down to win 4-2.

Derby later went on to lose in the play-off final to Aston Villa, but exacting revenge on Leeds after they had been wronged gave Lampard and Morris the ultimate feeling of satisfaction.

Now Leeds are in the Premier League after finishing 10th in their first season back in the top flight in 2020-21, and Morris has heaped praise on "fantastic manager" Bielsa for the job he has done.

But his bizarre method of collecting opposition analysis left the 42-year-old to ponder why a proven manager at the top level like Bielsa would go to such lengths to gain the upper hand.