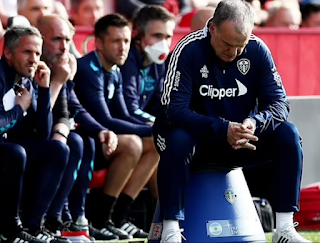 Leeds are looking blunt under Marcelo Bielsa and the impact of injuries to stars such as Patrick Bamford is outweighing the virtues of a small squad... battling off relegation was not what fans had in mind after last season's heroics

However, injuries appear to have knocked the stuffing out of the Yorkshire side

Ever bullish, Andrea Radrizzani, the Leeds United chairman, sat down in front of an audience in Lisbon earlier this month to articulate his vision for the Premier League club.

'If we stay in it this year I think we can go much more than last year and go into the top six,' the Italian told Web Summit attendees last week. 'Start to renovate the stadium and continue to grow the value of this club.'

It is a rosy vision of the future. It is also one that is currently under threat by the club's form on the pitch.

As things stand, the size of that 'if' is quite substantial. Marcelo Bielsa and his side have failed to build on the swashbuckling form that saw them win over the hearts and minds of many football fans during their first season back in the big time.

Their top-half finish - a widely lauded ninth place - was thoroughly merited. This season, those lofty heights haven't been quite so easy to reach.

Bielsa and his side are currently sat 15th with 11 points from 11 games - three fewer than at the same stage last season.

Once steely in their resolve, they have surrendered seven points from winning positions this season already. It would have been eight on Sunday but for the intervention of VAR to disallow Ademola Lookman's late winner for Leicester City.

It is a concerning sign for Bielsa, whose side battered teams into submission with their relentless playing style last season.

Of even more concern is the fact that their relentless nature is still there. The results, however, are not.

Through a mixture of injury problems and an absence of luck in the final third, the Argentine finds himself with a side slipping in the wrong direction.

The signs were immediate from the opening day of the season - a 5-1 defeat at the hands of Manchester United was a shock to the system but one that has largely set the tone for a disappointing campaign to date.

Victories have come, but both have been by the odd goal against two of the league's newly promoted sides a 1-0 success against Watford and a hard-fought 2-1 win over basement boys Norwich.

Other results have given cause for alarm, such as the failure to beat a spiralling Newcastle side at St James' Park and a toothless defeat at Southampton.

Of some comfort will be the fact that the style has not changed, nor has their dominance dwindled.

Looking at the attack momentum generated in their Premier League matches, according to SofaScore, Leeds generally tend to dominate proceedings.

That was the case against Wolves, Newcastle and Leicester, where only their inability to make the most of their chances saw them held to 1-1 draws on each occasion.

That failure in front of goal can largely be put down to the absence of their talisman.

Patrick Bamford started the campaign with an England call-up, and was involved in three goals in his first five appearances, laying on assists against Everton and Newcastle, while scoring the late leveller against his old club Burnley at Turf Moor.

His ankle injury, though, has caused problems at the top end of the pitch, with Rodrigo still unable to produce the goals on a regular basis.

Seen as a stunning coup at the beginning of the 2020-21 season, the Spain international struggled to adapt up top and managed just seven goals in the top flight.

Replacing Bamford as the main man up top this season has also proved an issue, with the striker scoring just twice in 10 appearances - one of which came from the spot against Wolves.

Bamford is not the only key absentee, with Luke Ayling and Robin Koch also having been missing for extended periods of time.

It is far from ideal for a head coach that relies heavily on a small cohort of players to carry out his plans through a season.

Last campaign he used just 23 players over the 38 games - the fewest of any manager in the top flight.

There have been some positives on the injury front, none more so than the return of Adam Forshaw after two years out with a hip problem on Sunday against Leicester.

Bielsa is rigid in his style of play. Looking to the opposition's style will dictate whether he plays a 4-1-4-1 or a 3-3-1-3. Even with key personnel unavailable, these are stuck to, sometimes to the team's detriment, as was the case when he went for the latter formation during the disappointing defeat at St Mary's Stadium.

That performance, along with the thumping defeats by Manchester United and Liverpool, have largely been the exception this season.

Bielsa has appeared disheartened at times by performances. 'I find defeat very difficult to tolerate and I try to make my players feel a similar way,' was his takeaway from the south coast.

Also of great comfort has been the form of Raphinha. The winger has taken up the mantle from Bamford for goals, delivering five in 10 outings from wide positions.

Bamford's return has been pencilled in for their next clash, against Tottenham on November 21 as has Ayling's from a knee problem.

Bielsa's top men cannot come back soon enough. As they do, Radrizzani might be able to look out those stadium plans once more.