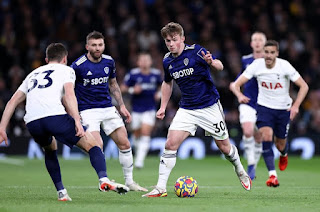 It took Joe Gelhardt just 42 seconds to make an impact on his first Premier League start against Tottenham Hotspur.

Joffy, as he is affectionately known, turned inside the Spurs half and drove at the defence before being hauled to the ground by opposing defender Japhet Tanganga.

If Antonio Conte and company weren’t quite aware of what the 19-year-old was all about ahead of kick-off then their first introduction inside a minute in the capital was a sign of things to follow.

As Marcelo Bielsa’s Leeds team news emerged in North London there was an air of anxiety among supporters.

Raphinha and Rodrigo had joined Patrick Bamford, Luke Ayling, Jamie Shackleton, Robin Koch and Crysencio Summerville on the absentee list while Junior Firpo was only fit enough for the bench.

A depleted Leeds taking on Spurs and Conte looked a forlorn task though when referee Andre Marriner sounded the half-time whistle the worries had lifted, mainly thanks to some fine skill from Jack Harrison and a perfectly-timed Dan James run.

Gelhardt in all likelihood will have gone to bed on the eve of his first top-flight start dreaming of rifling one into the back of the net in similar fashion as Wayne Rooney did for Everton all those years ago – someone he has been routinely compared to in his short career.

It wasn’t quite a Rooney-like introduction but Joffy had already produced a sprinkling of magic from the bench last month against Wolves by winning a late penalty to earn a 1-1 draw at Elland Road.

This time his opportunity came from the beginning amid the lack of numbers and in the spotlight of a Sunday afternoon kick-off live on TV. Perhaps it was also a nod from Bielsa to the fact he now appears to have jumped ahead of fellow forward Tyler Roberts in the attacking options.

Gelhardt, though, didn’t look out of place. If anything, he looked exactly where he was supposed to be – jinking, diving, chasing lost causes, putting his strength to good use as he gave the Spurs backline the runaround in the opening 45 minutes.

It has often been said that it is an impossible task to get the ball off him once he gets up to speed, and it was proven as he fell to the floor on the touchline under severe pressure. Though Gelhardt quickly hauled himself back to his feet to continue his run without giving the ball away or the defenders an inch.

A reverse backheel amid a one-two with Stuart Dallas showed the confidence of a player not afraid to make an error despite the stage he was on, nor was he worried about taking on those far beyond his years, as the booking he picked up on the half hour mark will attest – lunging in on Eric Dier to halt a surging run over halfway.

Joe Gelhardt averaging a touch in the opposition box every eight minutes in the Premier League this season (17 in just 128 minutes of football) - an admittedly small sample size, but that's the best average of any Premier League player to play 90+ mins this season. #lufc pic.twitter.com/EhyW7Y3mgB

Gelhardt was doing the dirty work well too – hooking the ball away at a corner and holding play up to win a free-kick and relieve pressure on the Whites defence.

In the second half he tested the palms of Hugo Lloris not once, but twice – producing another of those driving runs he has become so associated with before unleashing a dipping effort on goal.

There were ups and downs, as a loose pass on a counter-attack ended what was a good chance for Leeds to break out under relentless Spurs pressure as the game turned on its head.

When he stepped off the pitch in the 87th minute it was an impossible task to tell which player had been making their first Premier League start, a sure sign of things to come from one of United’s most prized young assets.

It was a display which saw 40 touches, 15 successful passes, five take-ons – the most across the Premier League over the whole weekend – four ball recoveries, eight duels won and three free-kicks earned with two shots on target.

“It was a very good experience, personally, to make my full Premier League debut starting at this stadium,” Gelhardt reflected post-match.

“I think we were unlucky with the result. In the first half we were very good but in the second half we just couldn’t soak up the pressure.

“It was hard in the first 20 minutes as you get used to the pace of the game and obviously with it being the first time I was starting in the Premier League.

“I think after that, I just saw it as a normal game of football. I’ve been doing it all my life. It’s hard with the physical demands in this team but I’ve been training now for over a year, so my body has adapted to it.”

It was made known recently that Bielsa rang Wigan’s academy director Gregor Rioch personally to thank and praise him and his staff for their hard work with Gelhardt as a youngster.

There is, though, a lot to be said for unleashing a player at the right time of his development. United’s boss refused to bow to outside pressure after his impressive Wolves cameo and instead chose White Hart Lane, a decision through perhaps some circumstance but mainly readiness.

“I’ve already learned so much in just a year of being here [under Bielsa],” Gelhardt continued.

“The intensity of training and the amount of technical information he gives you, both tactically and physically – he’s just very good to work under, because you learn a lot from him.”

Joe Gelhardt is now a fully-fledged Premier League player under Marcelo Bielsa – and one Leeds United should be very excited about.