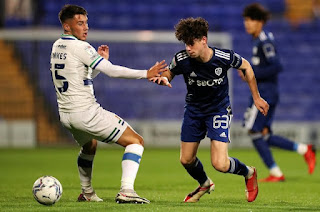 Almost 11 years separated Leeds United teenager Archie Gray from the man he was faced with in the Chelsea Under 23s midfield on Friday.

The Premier League 2 game at Thorp Arch brought a return to West Yorkshire for Blues midfielder Lewis Baker. In January it will be three years since he was recalled early from a loan spell with Marcelo Bielsa's Whites, and sent to Reading instead.

Baker started only two league games for Leeds, matches in which he was substituted at half-time, and played just 14 times in the first half of the season, predominantly as a substitute.

Following his time as a Royal he added Turkish and German top flight experience to a CV that already boasted four loan spells in England and Holland. He's played nearly 200 times as a senior professional.

This season is the last on his current Stamford Bridge contract and it appears highly likely it will be his last at Chelsea because, at the age of 26, he finds himself playing in the Under 23s.

Baker joined Chelsea in 2005, a year before Gray was born, so presented a stern challenge for the 15-year-old in Friday's 3-1 Blues win.

Gray is a very young boy playing in a young man's league - he has eight years to go before he's classed as overage in Premier League 2 - but Baker is a fully grown man with nous, physicality and no little amount of skill.

The grandson and great nephew of Leeds legends Frank and Eddie Gray did well, showing a few nice touches, linking up with attackers and starting attacking moves from deep with simple passes.

He helped Nohan Kenneh to win the ball back in the first half, pressed to stop Chelsea playing out, showed strength to win a free-kick and relieve pressure in his own half and dug out a nice cross from the byline after running in behind the defence to stretch the play.

His best bits of play were a burst forward that gave Sam Greenwood an outlet on the counter attack, taking the ball down with a deft touch and holding the ball up before finding a backheeled pass, and a third-man run that took him onto Leo Hjelde's through ball to win a penalty for Leeds.

There was a little naivety, a turnover or two and Baker old-manned him a few times, as should be expected, but Gray is 15. It cannot be stated enough.

And he wasn't the only precocious talent on display for Leeds.

Max Dean scored four goals in nine Premier League 2 appearances last season and, still only 17, is taking advantage of Joe Gelhardt and Greenwood's proximity to the first team by racking up the 23s appearances again this season.

He's got three goals from eight league games and against Chelsea showed a little of the edge he is becoming known for, launching into big tackles, refusing to give up on apparent lost causes and giving the referee ear ache after his late penalty decision.

Versatility is the spice of life at Leeds and Dean is being encouraged to add it to his game.

He played out wide on the right for much of the contest and had to curb his natural instinct to race goalwards at times, sticking to his position to offer team-mates an option on the flank, but he was unable to rein in his striker's instinct entirely, shooting whenever possible from difficult angles.

For Gray, Dean and others who could still be playing in the Under 16s and Under 18s, Leeds' injury crisis at first team level has provided opportunities. With so many of Mark Jackson's regulars called up to bolster the senior squad or fill spots in Premier League games, the 23s team has taken on a young look.

The game against Chelsea was an education, for Gray in particular, and an experience that will stand a player Victor Orta has raved about in good stead. The teenager will crave more of the same and be eyeing the trip to Manchester City next Monday and the games against Leicester and Everton in December as chances to get more 23s minutes under his belt.

Besides his rich family heritage of teenage first team involvement, Gray is a young footballer and they typically just want to play football. Any and all football.

Leeds, though, are mindful of the demands on players still very much in the physical growth process.

"It is a challenge sometimes, for us in the 23s, because we want to play the same way as the first team, with the same intensity and we analyse the physical stats after every game," Jackson told the YEP.

"We know what the first team produce, we know the levels we need to get to. Sometimes if they are young players still physically developing, those levels might not always be achievable and if we're playing a certain way it can impact results.

"The monitoring of the loading of players is done on a daily basis, we know what they're doing, how hard they're pushing themselves, what their physical output is in games, where they need to improve. George Bell who works with us and with Benoit [Delaval, first team fitness coach] and the first team, helps us understand the loading of players.

"We have a handle of that and it's going to help prevent injuries and help the players reach those physical levels quicker. Having your finger on the pulse and the expertise in the staff to inform me as a coach is really important."

In one sense, there is an urgency surrounding academy players like Gray and Dean, who have to prove themselves good enough on a daily basis, ticking off developmental markers and showing sufficient signs of growth that will keep them in the plans at Leeds.

To even train with the seniors a player must have something about him, physically and between the ears, and the requirements to make it as a Leeds player are considerable.

There's no rush, however, no pressing need for them to make it right now or even any time soon. If they're still playing Under 23s football at 26, something will have gone awry but for the youngest members of Jackson's team, time and patience are on their side at Leeds.