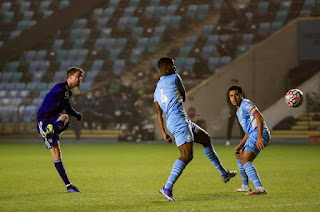 Patrick Bamford and Luke Ayling handed Leeds United a major boost upon their return to action from injury.

Bamford - who has one goal and two assists in five league games this term - suffered ligament damage in his foot against the Magpies while Ayling required surgery on a knee issue from the same game.

The injuries picked up at St James' Park has resulted in the duo missing United's last eight Premier League outings having spent the best part of 10 weeks sidelined.

Bielsa is finally seeing his Thorp Arch injury crisis begin to ease somewhat after the return of Raphinha, Rodrigo and Jamie Shackleton in the 0-0 draw at Brighton on Saturday.

Both Bamford and Ayling were called into competitive action for the first time in over two months for the club's Under-23s outfit on Monday night, leaving defender Robin Koch the only squad member battling for full fitness.

Mark Jackson's youngsters travelled to face Manchester City in the Premier League 2 and were aided by the inclusion of the returning senior stars.

Bamford completed 90 minutes while Ayling was replaced at the half-time interval at the Etihad Campus in the late 3-2 defeat.

💪🏼 Bill continues his journey back! pic.twitter.com/sfCalAySGo

United's No 9 looked sharp, holding the ball up and linking up play before rifling an effort into the top corner from outside the box only to be denied by a late offside flag.

Ayling provided one highlight in his appearance as he burst into the box to get to the byline from a Bamford reverse pass though there was no Leeds shirt on hand to fire home.

Tuesday's hosting of Crystal Palace at Elland Road may come too soon for inclusion at first team level though Bielsa will be hoping to recall them into his senior squad for the clash with Brentford in LS11 later in the week.

The pair could also be given another chance to prove their fitness when United's development side welcome Leicester City to York on Friday.