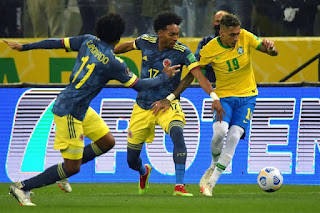 Raphinha’s arrival in the Brazil team has come as little surprise to those who spotted his talent and determination long before he ever appeared on Leeds United’s radar.

Yesterday morning’s 1-0 win over Colombia brought a fourth cap and second consecutive start for the winger, described as a ‘storm’ by Whites team-mate Illan Meslier.

That word fits perfectly when you consider the manner in which Raphinha has taken to life in the Premier League. In 40 English top-flight games since a £17m October 2020 move from Rennes, the 24-year-old has scored 11 times and added nine assists, becoming Leeds’ most influential attacker.

His Elland Road exploits have given him a platform from which he could ascend to the international stage and a starting place in a front three featuring Paris Saint-Germain’s Neymar and Manchester City’s Gabriel Jesus.

A stellar first year in England might have demanded the attention of Brazil head coach Tite and his staff, but they still did their homework, tracking Raphinha’s timeline back to his teenage years.

Although Raphinha grew up in Restinga, the Porto Alegre neighbourhood that gave former Borussia Dortmund midfielder Paulo César Fonseca do Nascimento his nickname of Tinga, his ability was not appreciated locally. Unlike Tinga who played for both Internacional and Grêmio in the Campeonato Brasileiro Série A before succeeding in European football, Raphinha had to take the long way round. Trials with the two local major clubs came to nothing and left him with no option but to play in the community-organised várzea tournaments in the hope of being spotted. His chance came when playing youth football for Imbituba, a club based 370km from his home.

“We watched Raphinha in a regional tournament, he was in the third division here in Santa Catarina and we brought him here,” said Diogo Fernandes, who was youth co-ordinator at Avaí Futebol Clube in 2014.

“He always showed a lot of potential to reach the highest level. a mentally strong player, fast and objective.”

Raphinha scoring a very Raphinha goal for @AvaiFC's Under 20s.pic.twitter.com/jScojJGjUO#lufc

An 18-year-old Raphinha joined Avaí’s Under-20s and spent two years on their books before Deco spotted him and arranged a transfer to Portuguese top-flight outfit Vitória Guimarães.

“Since we observed him in a friendly against our professionals, we detected a very promising athlete, daring, who faced our players on an equal footing,” he said.

“Even when he missed, he tried the next move, and that also caught our attention. Over the years, in addition to confirming what we projected, it showed even more. He was always extremely dedicated, an athlete who was always dedicated, he trained a lot, always improving his best technique.”

“A few months ago, César Sampaio, who works for the Brazilian team, asked us about the athlete, who was standing out in the Premier League,” said Fernandes.

“They asked for information about the player’s history, profile and training behavior. Raphinha has always been a very focused athlete.”

The pride Raphinha has generated at his former club extends to their fanbase in the city of Florianópolis.

Heitor Machado is a local journalist with Globo Esporte.

“Avaí was struggling financially, so they couldn’t keep the player or offer a career plan at the club,” he told the YEP.

“He didn’t play in the first team, but he already drew a lot of attention in the youth categories along with defender Gabriel Magalhães, who now plays for Arsenal.

“Raphinha’s success in the national team and also in the Premier League has a special meaning for Avaí fans, because the city’s rival, Figueirense, was proud for a long time of Roberto Firmino, formed in the youth categories of the club. A few years later, Avaí fans are proud of Raphinha and Gabriel Magalhães.”

One of their own wearing the famous yellow shirt will naturally be cause for celebration in Restinga and across Porto Alegre, although the city has been slow to catch up with his success.

Leonardo Oliveira, columnist for de Zero Hora newspapers and football commentator for Rádio Gaúcha, told the YEP: “For now, there are still no references [murals] to Raphinha in the city. I believe that will happen when we get closer to the 2022 World Cup. “As he didn’t play for Grêmio and Inter, and built his career outside the state from 15 or 16, the fans don’t know him very well.”

Oliveira caught on to the unfolding story of Restinga boy Raphael Dias Belloli years ago, however, and tracked his progress in Europe. He claims to be the first journalist to give the winger media exposure in Porto Alegre and interviewed him twice after his move from Vitória Guimarães to Sporting.

The stratospheric rise in profile and international recognition that has followed did not surprise Oliveira.

“After these two interviews with Raphinha at Sporting, I started to follow his trajectory,” he said.

“First at Rennes and when he went to Leeds, signed by Marcelo Bielsa. I confess that my reaction was not one of surprise. After all, I saw that he was on the rise. Since Raphinha’s arrival in Leeds, I’ve been following him even more closely, as almost all Premier League games arrive here via cable channels and streaming.

“I realised he was ready for the national team after what he showed in his first three months at Leeds.”

“Since last year, he’s been demanding his call-up for Tite, as he’s an extreme that the Seleção didn’t have, with dribbling and goals, said Oliveira.

“Brazilians are impressed and happy with Raphinha because it looks like we now have a player to share the defenders’ attention with Neymar. We didn’t have a second player with a dribble, with the essence of Brazilian football. Richarlison and Gabriel Jesus are great strikers, but with more European characteristics. Raphinha, on the contrary, is genuinely Brazilian.”

Taking the step from club football to the national team might have looked natural to the point of ease for Raphinha, but the journey he has taken from his district to the world stage has been long and it has built him.

Whether or not he always believed it would come, no-one in Brazil is more proud to see Raphinha playing for the country than his father, Rafael Ribeiro Belloli.

“The feeling for his call up is immeasurable,” he said.

“It was a whirlwind of emotions, even difficult to explain. Very gratifying for the recognition of the work he has been doing in England. Over the past few years, he has gone through different countries, different cultures, and all experiences were fundamental for development.

“Consolidation in the Brazilian team crowns his work.”