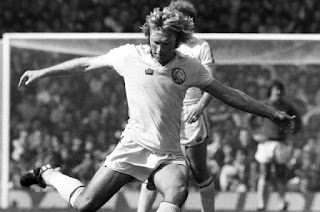 Back in the summer of 1976, Tony Currie crossed enemy lines to join Leeds United.

Yet during eight years at Sheffield United, the all-conquering Whites had his maximum respect.

“I was always jealous of Leeds’ success,” admits the former England international.

Three seasons that featured three defeats in semi-finals followed before the departure to Queens Park Rangers, the Londoner who began his career with Watford moving back to his roots.

Despite his own success with England, for Currie, three years at Elland Road were a case of what might have been.

But the midfielder’s time with the Whites created memories to last a lifetime, memories made even more poignant by the sad recent passing of some of his former team-mates and Leeds greats.

“There were four Leeds players if I remember or five,” he recalls.

“Norman Hunter, Trevor Cherry, Allan Clarke, Paul Reaney and Paul Madeley. They were all in the squad so I got to know them.”

It was an era during which Leeds had England internationals coming from every angle, Jack Charlton and Mick Jones having played their last games for the Three Lions in 1970 and Terry Cooper’s last appearance being in 1974. Charlton was in charge of a Middlesbrough side featuring Cooper by the time Currie signed for Leeds, tasked with filling the boots of Johnny Giles who had left for West Brom the previous summer.

Currie felt he did a pretty good job, rewarded with another 10 England caps during three years at Elland Road, taking his tally to 17.

The former midfielder only believes there could and should have been more and the sentiment is the same when looking at Leeds United’s trophy cabinet.

Yet despite Sheffield United remaining his first love, nothing will ever take away Currie’s pride at spending three years at a club he used to admire from afar, or the cherished memories of rubbing shoulders with the club’s greats.

“It was fantastic,” said 71-year-old Currie in an exclusive interview with the YEP.

“I was always jealous of Leeds’ success. They should have won a lot more with that team from 65 to 75 who I rated as the greatest club side during that 10-year spell.

“We were all jealous of them, not only me and not just at Sheffield United but everywhere because they were such a formidable outfit. But joining them was wonderful and all the players were still there apart from Jack Charlton who had gone on to manage and Johnny Giles who had gone to West Brom and that’s who they bought me to replace.

“That was a fault of Revie’s, he let them get too old, he let them all grow old together instead of replacing them here and there and keeping Leeds up there.

“But it was fantastic to go and play for Leeds. It was an honour, it was great to play with some fantastic players such as Eddie Gray and Clarkey week in week out.

“Peter Lorimer, I didn’t realise what a great player he was until I got to train with him and play with him, what a player he was.

“And Paul Madeley, what a player. A thoroughbred they called him. He was a fantastic player and of course you had (Gordon) McQueen and (Joe) Jordan still there and the squad was very deep in talent still. It was fantastic to play in that team.”

Reflecting on how he assessed his three years there personally, Currie pondered: “For my career they were successful. I got back in the England team and I played 10 games under (Ron) Greenwood there.

“Perhaps I could have played more but I was happy with that because I had been left out in the wilderness by Don Revie once he had become England boss. Although I was in most of his squads he only used me the once.

“It was a successful time for my career but we got in three semis in the three years I was there and lost every one which was a shame.

“We had Man United in the Cup in my first season at Hillsborough and we lost that 2-1 and then the year after we played Forest in the League Cup over two legs and got stuffed by them.

“Then the year after we got to the semi-final against Southampton and we had beaten them 4-0 in the league not long before and I scored that curler.

“We went down to Southampton and lost the second leg 1-0, so three tries at getting to Wembley so that was a bit of a blow but there you go.

“We had a decent side then even though Jordan and McQueen left. If we could have kept Jordan and McQueen then we’d have had a squad worthy of vying for big honours. Unfortunately we let them go to Man U and that’s unheard of really!”

Currie, meanwhile, moved back to the opposite end of the country when departing Leeds for QPR in the summer of ’79 having made 125 appearances for the Whites, netting 16 goals.

After three years at Loftus Road, the Londoner had a short stint in Canada with Toronto Nationals. Time at Southend United, Torquay United and Tranmere Rovers then followed before a brief foray into non-league.

Once his playing days were over, Currie was reunited with Sheffield United, becoming the club’s first community coordinator and later a director and ambassador.

Leeds, though, will always be in his heart – as will his former team-mates, several of whom Currie and the Whites fanbase have had to wave a sad farewell to over the last few years,

“With Watford, I only had two years there, I did a year’s apprenticeship and then a year as a pro and then I was gone so I didn’t really get a rapport with the crowd.

“But at Sheffield United and at Leeds and at QPR, the crowd, the fans, they just loved me and I loved them.

“I couldn’t do anything wrong for them. They were fantastic.

“I only had three years at Leeds and I have been associated with Sheffield United for 42 years, playing and doing the community programme and being an ambassador now. But I had great times everywhere I went.”

Paying an emotional tribute to Leeds United’s recent fallen greats – and recalling a particularly moving moment at Bramall Lane – Currie recalled: “Before Covid I went to Jimmy Armfield’s funeral. I also went to Mick Bates’ after, when we were allowed to go in.

“That was only a few months ago and I met up with Clarkey and (Terry) Yorath, Eddie Gray and Mick Jones.

“Johnny Giles was there, he looked well and it was sad to miss Trevor’s funeral because we were pretty close. We used to go on the golf circuit together, celebrity golf. I used to meet up with him a lot and he was a lovely guy.

“Trevor was one of my room mates for England and he was a lovely bloke, a great player, a great all round player.

“And Norman was Norman. Everybody was frightened to death of him. He was a great centre-back and I have already said about Peter. I didn’t realise how talented he was, great on the ball and I probably played with the two hardest shots in football history – Alan Woodward at Sheffield United and Pete Lorimer at Leeds.

“It was very difficult, I wouldn’t like to say who had the hardest shot. I always thought Woody had the hardest shot because I played with him so many times but they were both fantastic strikers of a ball and goal scorers so we will leave it at that I think!

“Peter was a lovely bloke and he was always late for training. He used to live at Bardsey and I lived a bit further out in Collingham near Clarkey and the Grays and that and Mick Jones although Mick had finished.

“I would be going down the A58 but he would come flying past. There was a line of traffic and he would fly up the outside on the wrong side of the road. Oh my god Peter what are you doing?

“I will always remember a few years ago when he came to Sheffield United to mark 50 years since I signed for the club. He came on the pitch before the game and presented me with a thing from Leeds and I’ve got it on my windowsill at home with all my other things.

“It says ‘to Tony Currie for 50 years’ service to Sheffield United from Leeds United’ and the words just made me cry. It was just fantastic. Pete gave me that and that was the last time I saw him.

“He wasn’t that well then but he came and presented me with that and it’s one of my favourite trophies. It was just a lovely thought from Leeds to Sheffield.”

Tony Currie’s autobiography, Imperfect 10: The Man Behind the Magic, by Tony Currie, is out now. The book has been penned by Andy Pack and Danny Hall.