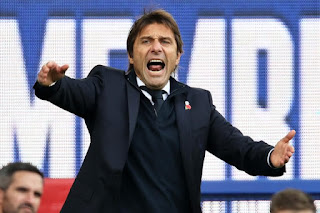 Antonio Conte will manage against 'serious person' Marcelo Bielsa for the first time in his career tomorrow at Tottenham Hotspur Stadium when Spurs host Leeds United.

The Italian, recently appointed after the sacking of Nuno Espírito Santo, is a big admirer of the Whites head coach, like many of his Premier League peers.

In the past Manchester City boss Pep Guardiola has waxed lyrical about Bielsa's importance in the game and how he's a 'gift' to the English top flight, while Jurgen Klopp has hailed the Argentine as a 'world-class manager.'

Conte appreciates what Bielsa has done on the pitch, but admires him personally too.

“This is the first time [for me] to play against a team of Marcelo Bielsa, " he told Spurs TV.

"For sure, Marcelo Bielsa is a top coach, he has great experience, a lot of experiences with national teams, with clubs and in every place he worked he did very well. I like him, because he’s a good person, a serious person and he has his own methods. He goes with his methods and I think this is great for me."

Leeds are often described as a unique challenge by Premier League bosses, thanks to their man-marking system, high press and high velocity football. The Whites outrun their opponents in most of the games they play and Bielsa deems a huge physical effort necessary to overcome the quality of elite opposition.

For Conte, matching Leeds' effort will be key at Tottenham Hotspur Stadium tomorrow.

“This is a team that is very physical, good organisation and we must be ready to keep the same intensity as Leeds," he said.

"At the same it’s important to have a plan to play against them. We are working very well and, for sure, we will try to make our supporters happy on Sunday.”