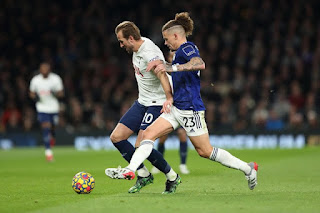 For all their effort and endeavour for large parts of this game, Leeds United left Tottenham Hotspur empty handed.

It has been a frustrating start to the Premier League campaign for Marcelo Bielsa and his players, with the defeat in north London their fourth loss of the league season. It also leaves them on just 2 2 wins from 12 games.

Missing a large chunk of their first-choice 11, not much would have been expected from the Whites ahead of kick-off as they faced a Spurs side playing their first home Premier League game under new manager Antonio Conte.

The Italian has won league titles in his home country and in England with Chelsea and is widely hailed as one of the best managers in the game.

However, injury-hit Leeds were keen to spoil Conte’s welcoming party.

After the Spurs fans provided a rapturous reception for their new manager, the visitors quickly quietened the crowd as they dominated the ball before going on to take the lead through Dan James late in the first half.

Tottenham - who were also hoping to see an improved Harry Kane after seven goals in two games for England - ran Leeds ragged at times in the second half with strikes from Pierre-Emile Hojbjerg and Sergio Reguilon eventually winning the game for the hosts.

The results leaves Leeds 17th in the Premier League table, two points ahead of 18th-placed Burnley.

The Whites are still in a glut of sides in the bottom half of the table separated by only a few points. Despite being seven places back from Everton in 10th, Leeds are just four points behind them.

There is time for Bielsa’s men to turn things around and there is plenty suggest things will brighten up once their injured stars begin to return.

Before kick off, things had already gone against Leeds.

Raphinha and Rodrigo, who had previously been expected to take part, were both ruled out.

Raphinha is understood to have been sidelined by an illness while Rodrigo is believed to have missed out with a minor foot injury.

Those absences added to an already unkind injury list from a Leeds perspective, with Patrick Bamford, Luke Ayling, Robin Koch, Jamie Shackleton and Crysencio Summerville already on the treatment table.

Analysing the injury list further, four of those players - Raphinha, Ayling, Bamford and Koch - would normally be some of the first names on Marcelo Biesla’s team-sheet.

The Whites’ injury problems were further highlighted by the fact that 15-year-old academy product Archie Gray was part of the travelling party to north London. Seven Under-23s players were named on the bench.

Despite their absentees, Leeds produced a dominant first-half performance to deservedly lead at the interval.

In possession, the visitors deployed what looked like a 3-3-1-3 formation with Kalvin Phillips sitting the deepest of all the Leeds outfield players as he was tasked with keeping England compatriot Kane quiet - which he did to great effect.

Gelhardt had a sight at goal early on when he shot from Stuart Dallas’s cutback but he fired his effort well over the bar.

Leeds enjoyed the majority of the ball in the opening 45 minutes but Spurs had an opportunity to take the lead when Heung-Min Son picked up a loose ball and drove from inside his own half to the visitors penalty area.

He cut the ball back for Kane but Phillips was there to calmly diffuse the attack.

Leeds continued to look in control and scored the goal their first-half efforts warranted just before the break.

All Bielsa’s side were missing was a quality pass in the final third and Jack Harrison delivered it when he skipped passed Emerson Royal with a nutmeg before providing an inch-perfect cross for Dan James to calmly slot home.

Spurs were reinvigorated after half time as a frantic second half sprung into life with barely a minute on the clock.

Kane found himself in on goal but his shot was saved by Meslier before hitting the face of the post and trickling out for a corner.

Straight up the other end, James tested Lloris with a shot towards the bottom corner before a succession of Leeds corner kicks resulted in nothing.

Leeds then escaped the ball hitting the woodwork for a second time when Son’s snapshot cross struck the legs of Diego Llorente and cannoned off the underside of the crossbar.

However, two goals in just over 10 minutes turned the game on its head. Hojbjerg claimed the equaliser as Lucas Moura beat Illan Meslier to a loose ball and then cut it back for the Dane to place in the ball into the bottom-right corner beyond the scrambling Leeds bodies.

An Eric Dier free-kick then lead to the hosts’ second goal as his effort struck the post but Reguilon was the only one to react as he hammered the rebound into the back of the net.

In all of the chaos, Son had shouts for a penalty turned down as he went down under a challenge from Phillips but replays showed there was no contact.

Leeds had their own penalty appeals turned down with Spurs ahead when Gelhardt’s effort on goal struck Kane on the arm from close range. VAR had a long enough look at the incident before deciding to stick with the on-field decision.

Perhaps on another day, the outcome for that decision and the result for Leeds might have been different.