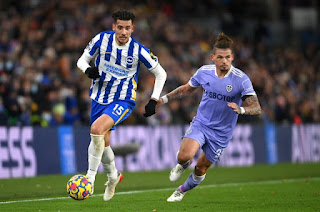 It wasn't pretty, it wasn't even fun really but it was a point on the road for Leeds United against a Brighton side who should really have won comfortably.

The performance won't live long in the memory, not for the right reasons anyway, but there were one or two positives to take.

Continued to show how important he could be to the Leeds cause this season. Was still pressing and darting around right to the end. One of few Leeds players to look after the ball with any real care.

He might not have stuck his chances away but at the very least Roberts gave Leeds an attacking presence that had been sorely lacking before his arrival. Got into good positions, made clever runs, created danger. For a much maligned player it was a brighter display and something to build on.

Got an absolute roasting from Tariq Lamptey and was dragged at half-time. In truth he was lucky not to be sent off given his early yellow and the subsequent fouls on the wide player. On the ball he was wasteful, too. Having struggled coming on at Tottenham the left-back has not made the finest of returns from injury.

The verdict is in #lufc https://t.co/wHNea49RGA

Started the game in the backline, where he had little impact, then moved into midfield as Bielsa changed it. Never really got hold of the game and looked somewhat bewildered. Appeared to have an issue with his calves, was seen stretching them on a number of occasions and spoke to fitness coach Benoit Delaval about it before being replaced at half-time, but when Marcelo Bielsa was asked at full-time he said the midfielder wasn't injured.

A year out from playing for Brazil in the heat at Qatar he looked furious with what was going on around him on a bitterly cold day at Brighton. Couldn't get into the game, very little that he tried actually worked.

Unfortunate to be dropped after his performance at Spurs. Had to watch from the sidelines as Daniel James ploughed a fruitless furrow up front and then Bielsa turned to Roberts in the final stages. His time will come but you could forgive the youngster for leaving Brighton disappointed not to have muddied his boots.

Once again took the blame. Believes it's something he's not doing well enough that is causing Leeds' problems. Sometimes, though, when a player can't make a simple pass or picks totally the wrong option it's surely not on the head coach. The Argentine is going through arguably his roughest patch as Whites boss as he seeks answers to a myriad issues.

NUMBER OF THE DAY

The woodwork came to Leeds' rescue on a trio of occasions, showing just how fortunate they were to be leaving the Amex with a point. The first half in particular was nightmarish for the Whites and the Seagulls could have flown out of sight, making the point Leeds gained a fairly decent result.

Marcelo Bielsa's introduction of Pascal Struijk helped, because he got on the ball and played forward to help create chances. Leeds in general were a bit better in the second half and at least ensured it was not one-way traffic as it had been prior to the break.

Bielsa attempted to brave the crisp, cold seaside air in just a tracksuit but lasted no more than one minute and 40 seconds before turning to his staff to request a jacket. In the second half as his coffee was delivered he asked for his hat and then turned to hunker down and watch the game, leaving a staff member to approach him and plonk the hat atop the head coach's head. Stick that on your CV, son. From time to time Bielsa's passion and urgency takes aim at players, match officials or his own staff and it was the latter group who were on the receiving end in the first half at Brighton as his frustration with something that was happening, or not happening, boiled over.

Pascal Struijk was recalled to the bench towards the end of the first half and had a conversation with Benoit Delaval. The defender appeared to be explaining how he was feeling and as he was sent back out to warm up again, Delaval relayed the message to Bielsa. The head coach would later explain that Struijk wasn't in condition to play the full 90. So as the teams came off at half-time, Bielsa approached Jamie Shackleton for a quick chat, informing the youngster that he would be coming on for the second half.

Liam Cooper's body language said it all at the half-time whistle, shaking his head ruefully as he walked towards the tunnel. The skipper would have taken a point with both hands there and then, had it been offered.

At full-time both Struijk and Roberts took off their shirts to hand them to fans in the Brighton end, beside the Leeds dugout. Either some Brighton fans went home with unexpected gifts or there were more Leeds fans in the ground than the 3,000 packing the away end.