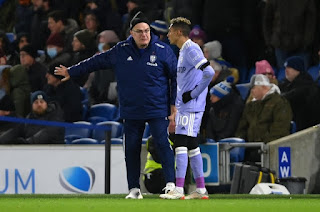 Marcelo Bielsa hopes Leeds United's second half performance in the 0-0 draw at Brighton will give them a base to build from.

The Whites were dominated by Graham Potter's men in the first 45 minutes at the Amex and were fortunate to go in at the break level. Neal Maupay was guilty of missing a golden chance, Tariq Lamptey caused Leeds untold problems down the right and Leandro Trossard was a menace as Leeds were given a torrid time of it.

There was an improvement from Leeds in the second half and they came on strong towards the end, finally creating some decent chances that Tyler Roberts was unable to take.

Bielsa took the events of the second half as a positive.

"In the first half the differences were very big in their favour," he said.

"In the second half we managed to play as equals, we defended better, we created chances, not too many but in proportion to the opponent. In the first half we didn't defend well, we conceded a lot of chances at our goal and we didn't take advantage of the balls where we had the possibility to create danger.

Bielsa began the game with the same backline that started at Tottenham, before switching it due to what was happening in front of them.

"The formation of the back four responded to the same idea as in the game against Tottenham," he said.

"Considering their left winger as a winger who made diagonals into the box, their number nine as a player who tended to drop deep and then go back into the box and their number two who played out wide as a player who liked to go on the outside, that this position was similar to the one we came up against at Tottenham. Evidently it didn't work so I distributed the players again. Not so much defensively, because Phillips as a right centre-back was playing well and Diego as a right full-back wasn't playing badly. In the middle of the pitch, Forshaw and Dallas, I had the impression it wasn't a consistent midfield. So after I decided to put Dallas back to right-back, Llorente at centre-back and Phillips at centre-mid."

The Argentine was not left with the feeling that chopping and changing had a negative impact on his players because those who moved positions were taking up familiar roles, but he again insisted that Leeds' struggles are down to what he is doing, or not doing.

"When a team performs consistently it is due to numerous factors, players being at a good level technically and physically, when you manage to mix in proportion creativity and organization, those are things that I try to get, clearly the function of a coach is for each player to play comfortably and that the state of mood allows them to have a good physical performance, bringing up all the energy that they gain through their preparation, that they have confidence and security to improve their esteem and increase the creative options," he said.

"But that is my function. When it doesn't happen it is because I am not doing it well but football has secrets that sometimes are difficult to solve. If we united the first half at Tottenham and the second half here we would be satisfied and if we united the other halves we would be unsatisfied and that happens in a lapse of time that is very short. The balance of a team,the equilibrium of a team is broken very easily and you have to pay a lot of attention and realise why this happened and try to resolve it, this is what I try to do and evidently I am not achieving it."

"I thought it was convenient that he came on because he could do so as a centre-back, left-back or defensive midfielder," said the head coach.

"I preferred to reserve him and see how the team evolved and to utilise him where I thought was most necessary."