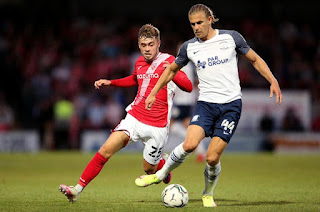 McCalmont, on loan for the season with Morecambe, scored either side of Paul O'Neill's disputed penalty before Chris Conn-Clarke's late free-kick capped a dominant performance from John Schofield's side in an often ill-tempered game at a blustery Ballymena Showgrounds.

Though there was an early scare when Nauris Petkevicius hit a post from distance, Northern Ireland led eight minutes in, a superb ball from Oisin Smyth freeing the impressive Paddy Lane whose low cross was blocked before McCalmont fired the loose ball into the bottom right-hand corner.

Trai Hume's superb volley was gathered at the second attempt by Gustas Baliutavicius but Northern Ireland doubled their lead before the break with the help of a controversial penalty.

Lithuania were fuming as Ryan Waide was clearly offside as a ball was played through but, after holding up a hand, he chased down Vilius Armalas regardless, won the ball and forced the defender into a foul, with the visitors still berating the officials as O'Neill sent the goalkeeper the wrong way.

Lane headed in from McCalmont's corner early in the second half but was denied as referee Joonas Jaanovits blew for a foul, but Northern Ireland got their third when McCalmont fired home from close range in the 75th minute.

The Leeds midfielder narrowly missed out on a hat-trick as he sent another effort wide moments later, but there was still time for substitute Conn-Clarke to find the net with a free-kick four minutes from time.