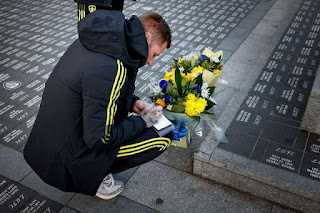 Former Whites star Speed died aged just 42 ten years ago this weekend and Leeds will pay their tributes at Saturday evening's Premier League clash at Brighton - a decade to the day since Speed passed away.

On the tenth anniversary of his passing, Leeds will wear warm-up t-shirts and black armbands in Speed's honour at the Amex whilst captain Cooper and Dallas have already paid their respects on Friday by laying flowers at Elland Road's Bremner Square.

Paying a moving tribute to Speed both as a player and as a man, Cooper said: "These days creep up on you and you are reminded of such legends and Speedo was one of those.

"People never know what somebody is really going through and in this case it was too late.