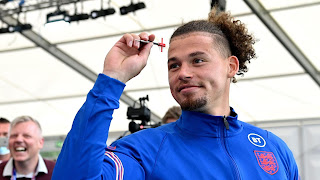 If there’s one thing Leeds United fans and players have in common at the moment it’s still getting giddy when famous footballers know who we are. It might not fit the Dirty Leeds hated-but-never-ignored self-image, but we can’t resist the vicarious thrill of finding out Kalvin Phillips got a video message from Andrea Pirlo himself on the eve of the European Championship final. And hold up, let’s not forget our little Wortley Kalvin was playing for England in a major final in the first place. England! In a final! Kalvin Phillips! Andrea Pirlo!

“Good luck in the final and all the best.”

That’s what Pirlo told Kalvin, who told the England press pack, as reported in The Times this weekend. But who arranged for this video message from the Actual Pirlo to the Yorkshire Pirlo? The answer is always Jackie Harrison, Pirlo’s former teammate at New York City and friend to the stars.

And Frank Lampard Junior, who Jackie said a few weeks ago texted him after our promotion, making it seem like even Lampard Junior’s text messages follow his ‘having a laugh no but seriously’ interview template. ‘Congratulations, you’ve done really well,’ Lampard Junior sent to Harrison, and that’s nice! How friendly and sporting. But there’s more: ‘But I saw you singing that song.’ Now, Jackie knows Frank Junior better than any of us, and he’ll tell you this was his ol’ mucker having a joke about Leeds players and fans singing ‘Stop Crying Frank Lampard’ after going up. The problem is we’ve all seen too much of Lampard Junior’s big dish over the years and can too easily picture it clouding over as he moves from the start of that message to the end. ‘Hahaha well done Jack I FUCKING DID SEE YOU’.

Anyway, putting Lampard Junior back in his box until he lands a soft-touch Premier League job to buff up his featureless managerial CV, let’s concentrate on Harrison’s other New York mates: David Villa, Patrick Vieira, the Costa Rican Rodney Wallace and Andrea Pirlo. What’s missing from the story of the text from Pirlo (I) to Pirlo (Y) is who instigated it. Was Andrea a few bottles deep at the vineyard one hot summer night, suddenly inspired to tell Kalvin he’s his best bloody mate and he doesn’t care if he’s playing Italy, he’s the bloody best, and Jackie knows him so I’ll film this and send it to Jackie to tell his friend I like him? Or was Harrison the instigator, maybe picking up on Kalvin’s nerves in the group chat, asking Pirlo to do something nice for his mate?

Either way Kalvin was pleased, thinking, “Oh my god!” and, he told the press, “I thought he was going to say something about Italy but no, he wished me well. Full respect for that. I’ve seen that he’s very cool, but I’ve heard he’s a nice guy as well. To have someone on the other side wish you well and especially a player like that… it’s a great feeling.”

Much of the rest of The Times’ article deals with the prospects of England’s midfield, now anchored by the player Pirlo admiringly called “a bit of a regista” — i.e. Kalvin — with Declan Rice, Jude Bellingham and Phil Foden bobbing into harbour around him. The most interesting part, though, is Phillips talking about his own style of play, which he says is more like Italy’s Marco Verratti than Pirlo.

“I’ve always loved him,” says Kalvin. “I like getting stuck in. When I watch him — the way he controls the game and if he needs to rat about, he can rat about. He’s very physical and gets into the game really quick and gets stuck in, which I like.”

So that’s rats, ratting about. We’ve also got this, about playing with Rice:

“We’re two very similar players but work in different ways when we play together. Declan is almost a protector in front of the back four and I’m almost a dog that goes running after people that have the ball.”

And now we’ve got dogs! At least it wasn’t ferrets and whippets. You don’t need me to tell you there’s more to Phillips’ game than ratting about like a dog. And I don’t need to help you imagine the self-effacing twinkle with which our modest midfield maestro will have dismissed his own talents. I don’t know if anyone challenged Kalvin on this — dog? rat? okay, but pedigree breeds, man, pedigree breeds! — but if he did, I know Kalvin answered, smiling, ‘Naaaaaah…’

The press call was not all happy anecdotes. Phillips talked about why he stayed on the pitch at the end of the Euro 2020 final, with “Ben White and a few other lads.” I’m tempted to suggest that if Ben White had decided to end his night piloting a hot-air balloon Kalvin would have jumped in it with him and gone to the end of the earth, but he says there was more to it than quality time with Benji. “I just wanted to see what it was like to win a major trophy. I wanted to see their reactions and their fans’ reactions as well.” He wasn’t impressed. “I think — no disrespect to Italy or anything like that — but if England had won it, the celebrations would have been a lot better than theirs!”

If you’re worried that sounds like he’s inciting riots, fear not. Kalvin’s tale of watching England at the last World Cup in 2018 is right here to warm your heart. “I had a house in Leeds and had all my friends over to watch the quarters, semis. I can remember Kieran Tripper’s free-kick going in and I think I wrecked my living room. And then after I was tidying up, disappointed that we lost.” That’s how we party with Kalvin: celebrations all night, then he’s up bright and early with Ben and some bin bags to put the house right.

There was one other reason for hanging around at the end of the Euro 2020 final. He’s got his bittersweet medal — “I took it off but I gave it a kiss … It’s in my kitchen, on the mantelpiece. I have like a trophy cabinet there. That’s the place I spend the most time. Every time I walk in, I want to see it” — and he’s got his bittersweet memories. “I still think about it now, I think about what could have been if we’d won. I can remember a certain chance in the game when I had a volley on the edge of the box and obviously it’s fairytale stuff, but just think, imagine if that had gone in?”

But he also wanted Marco Verratti’s shirt. Verratti, though, said no. “Obviously, he might have wanted to keep it as well as a souvenir for himself. There’s no hard feelings on that one,” says Kalvin, and as pleased as me and Kalvin both were about that message from Pirlo (thanks Jackie, from both of us), I think I’m angrier than him about this. Jackie needs to ask Andrea to get Marco to send Andrea a shirt that he can give to Jackie to present to Kalvin.