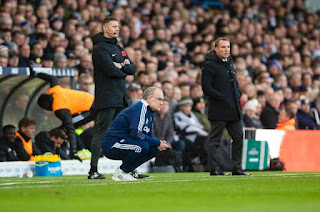 Marcelo Bielsa praised his Leeds United players for producing a "beautiful game" and highlighted how "very necessary" Pascal Struijk has become to the team.

Leeds looked set up to play three central defenders at home to Leicester City but the wily Foxes are so flexible tactically, and set up with a 4-3-3 formation. Against teams who only play one centre-forward, Bielsa only likes to use one centre-back.

"He's a very hard-working man in the mental and physical assimilation of a new position," said Bielsa admiringly.

"Throughout the week he was looking for solutions for the problems of a new position."

With players as adaptable as Struijk, not being able to second-guess the opposition shape is less of an issue.

"It's not a problem," said the Argentinian. "For a long time we've been going through all the tactical situations that can happen in a game so we never have to come against a new or unknown situation.

"All of those variety of positions that he resolves naturally make him a very necessary player."

Leeds could take great pride in their performance, and deservedly took the lead through a first-half free-kick from Raphinha, his fifth goal of the season.

But they switched off immediately afterwards, allowing Harvey Barnes to score an equaliser.

Leicester thought they had scored a second-half winner, only for Ademola Lookman to have been found by the video assistant referee to be marginally offside before he put the ball in.

To have taken nothing from the game would have been very unjust, and Bielsa was delighted with the performance.

"They looked a lot more like the team able to construct, had good recovery of the ball, generated possession, created danger, had a higher percentage of dominance of the game, and duplicated the opponent in the chances," he said.

"These are all aspects to value.

"Apart from that, it was a very beautiful game to watch."

Jamie Shackleton and Junior Firpo missed the game through injury - which is why Struijk was needed at full-back, and Bielsa also explained why youngster Joe Gelhardt was not in the matchday squad.

"Gelhardt felt some discomfort in the game on Tuesday that in itself is not an injury, but he didn't feel at 100 per cent for a high-level game."

Adam Forshaw made his full Premier League debut for the Whites, and was only substituted as the game was about to go into stoppage time.

It was a real achievement for a player who has missed most of the last two years through injury.

"We have to value the personal achievement of Forshaw and I do it especially because I really didn't think he was going to be able to do this," admitted his coach.