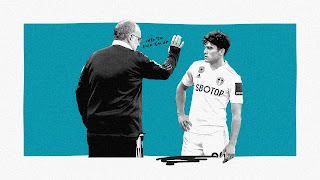 Have you calmed down yet? I’m not sure I have. After Leeds drew 1-1 with Leicester, my usual post-match debrief with friends over pints in The Holbeck largely consisted of weary looks to one another and the tentative question, “That was… fun, right?”

It’s been a long time since I’ve left Elland Road so emotionally exhausted, and it felt good. After a weekend in which Raphinha’s Instagram raindance put an end to former Championship foes Neil Warnock, Daniel Farke and Dean Smith, winning would have felt too obvious, losing too heartbreaking. Instead, the result, but more specifically the performance, provided exactly the right dose of angst and adrenaline. Just how we like it.

The opening fifteen minutes of the second half had a lot to answer for, as Leeds used Leicester as bewildered opposition for a session of murderball. I’m fascinated by what triggers these spells of frenzied intensity, when the visiting team are made to feel like they’ve been thrown in a washing machine, shutting their eyes and holding on until the world stops spinning. Is it the instruction of Marcelo Bielsa, or was Leicester’s tardiness, emerging from the tunnel long after Leeds were ready to get things going again, the inspiration? Do the players take their cue from the noise of the crowd or a moment of class or commitment from a teammate? Is it the instinctive alchemy of eleven bodies and minds suddenly synced?

As captain, Liam Cooper might know the answer. His awkward back pass at the start of the second half weirdly seemed to help, giving Leicester a corner and the Elland Road crowd flashbacks of Norwich’s goal the previous week. Once Youri Tielemans drove his shot wide of Illan Meslier’s post in the aftermath, Leeds decided the next stage of the game was going to belong only to them.

The signs weren’t obvious. Meslier’s goal kick was volleyed straight back into the Leeds half, forcing Cooper to stretch and scuff a clearance awkwardly into Kalvin Phillips. As Leicester were sensing the chance to press Leeds high up the pitch, Adam Forshaw cushioned the ball back to Phillips, who hurriedly passed it square to Stuart Dallas on his right. Elland Road was quietly panicking, making the murmurs Victor Orta fears, until Dallas started running down the right wing, finding Dan James with a clever pass between full-back and centre-half. James’ cross was blocked, but the muscle memory of those gruesome midweek sessions at Thorp Arch was awoken.

The physics required in Jack Harrison’s miss from underneath the bar are one of the few things in life beyond Bielsa’s mastery, but perhaps if he’d scored we would have been deprived of the next ten minutes of ferocity. Harrison robbed himself of the credit he deserved for the gorgeous cross that led to the corner in the first place. Leeds’ crossing was frustrating throughout, but this was a peach, arcing towards the edge of the six-yard box, where Caglar Soyuncu nearly headed the ball into his own top corner. The crowd was sensing the potential in Leeds’ play, and the involvement of pantomime villain Kasper Schmeichel helped keep the Kop’s ire away from Harrison and towards the opposition.

As the intensity was rising, Bielsa was preoccupied with adjusting the lid on his half-time brew. His composure suggested things were going to plan. Wherever he looked from the sideline, he saw James, haring back and forth, side to side, suffocating Leicester’s defenders and crashing into tackles like the creation of a mad scientist fusing the DNA of Gjanni Alioski and David Batty (unfortunately, he was shooting like them too). One tackle on Soyuncu created another dangerous opportunity and when Leicester finally dared stringing three passes together, James threw his whole body at Wilfred Ndidi, winning the ball and leaving the visitors still dreaming of reaching Leeds’ half. One Leicester clearance did pass halfway, where Cooper was standing as the only outfield player in Leeds’ part of the pitch. Back it went towards Schmeichel’s goal in a blur of pass and move.

Forshaw has waited more than two years to feel this buzz again. While it’s tempting to think the presence of a steady central midfielder helped Leeds become their frantic best, Forshaw must be sick of watching and was never going to step back and let his teammates have all the fun. He kept appearing on the right wing, linking up with Raphinha and Dallas, twice finding clever cut-backs into Leicester’s penalty area, desperate to be met by a Leeds shot that never came. Dallas was playing like Pablo Hernandez from right-back, pinging passes with the inside and outside of his right foot. An assist should have arrived as a reward when overlapping and sending in the perfect cross for Rodrigo to score, but the ball was volleyed into the side netting.

In LUTV commentary, Bryn Law was trying to be heard over the crowd. “No noise like this noise in the Premier League,” he said. But Leeds had used up their quota of big chances and Rodrigo’s miss gave Leicester a chance to take a breath and put their heads back on the right way round. Phillips’ foul on Tielemans meant Leicester could waste time and momentum. In the 60th minute, they won a corner, giving the South Stand their first close-up of the game since Cooper’s wayward back pass; it was the first time since half-time Leicester played more than one pass to a teammate in Leeds’ territory.

At full-time, Bielsa described the game as “very beautiful”, telling his players he recognised them for the first time this season as the team built in his image. Watching Leeds when they find their groove under Bielsa makes watching any other team feel pointless, like watching a different sport. When Leeds are as good as they were for those fifteen minutes, why would you want to watch anyone else?