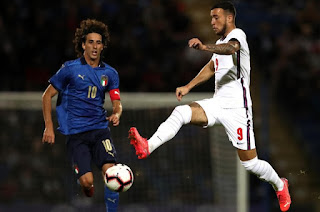 Leeds United trio Charlie Cresswell, Cody Drameh and Sam Greenwood all played for England's under-21s in Tuesday's 3-2 defeat in Georgia in which Greenwood scored on his debut.

Whites duo Cresswell and Drameh both started the contest in which Greenwood was brought on in the 36th minute to replace Folarin Balogun.

Cresswell was making his first start for England' s under-21s as Drameh and Greenwood both made their debuts.

England trailed 1-0 at the break to a strike from Giorgi Guliashvili who then doubled his and Georgia's tally one minute after the interval.

Cresswell picked up a second half booking for getting into a shoving match after he felt an opponent left a foot in after the play had been stopped by the referee for a foul on the Leeds defender.

Seconds later, team-mate Greenwood barged into a home defender as the game heated up.

The hosts bagged a third goal in the 65th minute through Giorgi Gocholeishvili and Drameh was taken off in 77th minute for Max Aarons before Greenwood got the final touch as England pulled a goal back four minutes later.

Clinton Mola's header was heading in but the ball flicked off Greenwood's shoulder on its way past 'keeper Giorgi Mamardashvili.

Marc Guehi then bagged a second goal for the young Three Lions in the fourth minute of stoppage time.