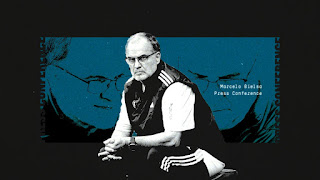 Bielsa before Brighton is taking everything on his shoulders

Here’s Marcelo Bielsa’s pre-Brighton press conference (YouTube/YEP), time for him to say everything very slowly, twice, either to make sure you’re getting it, or because he’s been listening to Yes Sir I Can Boogie on repeat:

Yes sir, already told you in the first verse and in the chorus,

But I will give you one more chance

Bless the poor journo whose connection unZoomed, leaving him thinking only Raphinha was off the sick list at Leeds, when Bielsa had just been through it once, and as Andrés Clavijo’s eyes filled with fear, decided to give him one more chance:

“I will repeat everything once again. Shackleton is available. Raphinha is available. Rodrigo is available. Ayling is healthy, it’s likely that he will play with the under-23s on Monday as a further step to his total recovery. The only two players that are in the final period of their recovery are Koch and Bamford.”

“Bamford has an injury in his ankle, it has been a serious injury and the evolution changes. That’s why his definitive recovery is extended. Koch had to go for surgery and the terms of his recovery are what were expected. You can’t be absolutely precise and that’s why I always say it is subject to the evolution, depending on how it goes while they recover.”

And now I feel bad for turning all Bielsa’s mentions of injuries being ‘subject to the evolution’ into a drinking game last week. Sorry Marcelo!

One player who wasn’t and isn’t injured was Crysencio Summerville, it just turns out Bielsa wanted Liam McCarron and Stuart McKinstry in the squad for Spurs instead. Well, it’s his squad. That was the press conference’s other major theme, and this felt like it was prepared in advance as well, from a summary of talking points Bielsa has been through several times before: squad size. Maybe that needs capitalisation now: Squad Size. The Squad Size Question. The question was actually about whether Tyler Roberts might want to go on loan to further his hopes of getting to the World Cup with Wales, or might that leave Leeds’ small squad too small? The answer was 750 words long, starting with, “With respect to if we are missing players or if the squad is short or small…” which wasn’t really the question — although he’d been asked earlier if injuries were a reason for poor form — but certainly has been The Question lately.

“I look over the decisions that I make,” said Bielsa, commencing a retrospective of this season’s injuries suffered and solutions found. For example:

“Pascal has been the alternative when Firpo and Dallas have not been available at left back and in the last two games he has shown that he deserved that trust.”

— we don’t need to go through them all, although he pretty much went through them all. We know Bielsa prefers to point to results rather than theories, which is why he’ll never be drawn into hypotheticals, so this was a practical demonstration of what he hopes his lean squad will do based on it doing exactly that.

“When you add players to have a bigger group it decreases the possibilities [for players] to come into the first team. If you have more players for the same need, there are fewer minutes for the players.”

The concrete result of the way he’s run his squad this season means that:

“Always with the acceptance of the public, and the media, I try to see if we really have to adhere to these demands for signings, or if [we can] keep the same players and to have patience. Because that allows James to consolidate himself, for Gelhardt to find the space, that Summerville can have the same process as Gelhardt, managing that Forshaw has a constant presence in the team once again, allowing for Rodrigo as a 9 or a 10 to show his qualities, being able to allow Ayling to play well as a centre-back and Dallas as a left full-back, capitalising on Pascal as an important player and Shackleton [as well] … if we had a squad with more players, these options that have consolidated the group wouldn’t have been produced.”

In other words, with more players in the squad, players like Struijk and Gelhardt (and he cited Illan Meslier too) wouldn’t get the chance to progress and establish themselves in the first team. Longer term, he reckons, a Premier League level Pascal Struijk will be good for the club.

He did eventually get back to Roberts. “Tyler is also someone who I have been accompanying with his efforts to get into the team, and while he continues to have that desire to fight for a place in the team then I will still want him to be here.” And he mentioned transfers to date, too, saying there have been plenty: “A club that has bought Rodrigo, that has bought James, that bought Raphinha, that bought Llorente, Firpo, Koch, there are many signings, and naturally in the money that is invested I feel completely that I have been given the resources.”

Right. But we’re 17th. And Bielsa said two interesting things about that.

“To summarise, I think the club has put enough human resources at my disposal for the results to be different. I can’t attribute the position in the table, nor the injuries, to not having a sufficient amount of players. Obviously what is left is the management of the players that I have, and I think that is where the focus of the attention is.”

He’s got enough in the squad for us to be further up the table, and we’re not further up the table, so given everything in Bielsa’s view of the club is good, he can only conclude that he is the one who is not good. He had already touched on this, and that’s the other interesting thing about it, because he brings his wages into the conversation:

“I am in charge of a group of footballers who deserve to be in a higher position, and the club has trusted in me. One of the aspects that shows this confidence [in me] is what they pay me to do this job, and of course these results that I am offering are not what is expected.”

In other words, Bielsa doesn’t feel like he’s earning his money at the moment. Don’t blame injuries, that’s luck. Don’t blame the transfer policy, the club have invested all they can. Don’t blame the squad size, Bielsa can show you how this is helping fringe players get better. Don’t blame the players, because like at Spurs when he couldn’t find a solution in the second half, he’s the one telling them how to play. In Marcelo Bielsa’s view, the only part of the Leeds United machinery not producing the results required is the Marcelo Bielsa bit. And, says Marcelo Bielsa, they’re paying enough for that part to expect better from it.

Even if it’s accurate, that feels like a painful amount of responsibility for a manager to be taking on himself, especially in a sport defined by the macho performance of screaming blue hairdryers in the faces of teenagers at half-time. But as Bielsa was saying last week, about Antonio Conte, one of the key aspects of the managerial style he prefers is convincing the players to believe in what the team are collectively attempting. In Luke Ayling’s interview with Phil Hay in The Athletic today, he talks about Bielsa:

“Look, the boys here know how much he’s done for us, how he’s changed us. He’s changed our careers and our lives. We’ll fight for him every minute we’re out there and when games have been going bad, you’ve not seen us sulk or stop trying. You’ve not seen that. We’ll always fight and part of that’s because of the total respect we have for the gaffer.”

And that makes me think the players at Leeds will hear their manager taking all that pressure upon himself, and want to help him.

One other part of the press conference feels worth pointing out. Bielsa was asked what satisfaction he finds in being a manager. Seeing his team play well, basically, but also feeling that being reflected in the responses of the fans. “To give an example, when the first half of the game against Tottenham ended, and I realised that the stadium valued what we had produced, whether it was our own fans, or those who attended the game in general.” In other words, the Spurs fans booing their team off. And although Bielsa immediately noted that didn’t mean three points at the end of the game, yeah, I found that bit quite satisfying too.