There is no 'difficulty' between me and Kalvin Phillips at Leeds United, says Marcelo Bielsa - Yorkshire Post 29/11/21 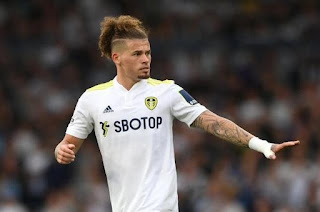 LEEDS UNITED head coach Marcelo Bielsa insists there are no issues or 'difficulty' with Kalvin Phillips following his decision to substitute the England international in Saturday's Premier League game at Brighton.

Phillips was deployed at centre-back rather than his usual position in midfield and was brought off at the break and replaced by Pascal Struijk.

It prompted TV pundit Jamie Redknapp to suggest that 'something is not quite right' between Phillips and Bielsa after the match.

Phillips featured in a back three in the previous game at Tottenham last weekend and commented that he was not sure about the reasoning why when interviewed after the game.

Asked by journalists about the future of Phillips, Bielsa, whose side welcome Crystal Palace on Tuesday night, said: "Kalvin Phillips is an idol for the Leeds United fans and a popular property with a lot of affection.

"The fans suffer when they lose an idol. Kalvin is a player who has done a lot of things to deserve how the fans feel about him. "What he has done has been sincere and not conditioned. He opted to stay with Leeds when could have left when we were in the Championship.

"He cleared up what his position was when asked about moving to the best teams in Premier League.

"He had sincere responses in saying he wouldn't accept any offers.

"Due to his performance, position and respecting his club Leeds, the position Kalvin occupies is completely deserved.

"What you are asking (about Phillips) is the conclusion of something very simple. It is very difficult to imagine that a player can never come out and be substituted from a team.

"The logic of football shows that in any game, any player can come off. It can't be that a coach is conditioned that one player cannot come off.

"The explanation I gave (for the substitution) is one I thought. It thought that Pascal was better suited in the second half to Phillips. It doesn't mean I am correct, but did what I thought was best.

"But in no way does that mean there is a difficulty with anyone. It is never good for a player or team to think that decisions (players) are immovable and that hierarchies in a team cannot ever be altered.

"It is not only bad for the player who is untouchable, but bad for those who want to alter the positions within the team. It would be bad for Kalvin to think he would never be substituted.