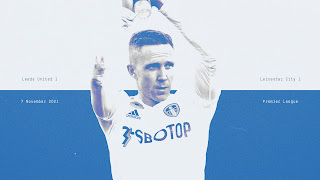 They call him El Loco, y’know, The Mad One, The Crazy Guy, The Fool. And if you’ve ever followed the story of Leeds United Football Club even a little bit then you already know about them.

Here’s El Loco Leeds, though, eleven games into the season, together in relegation trouble they’ve never known, and they’re calm. It’s everybody else acting completely and utterly deranged.

United’s 1-1 draw with Leicester City on Sunday took them above Aston Villa in the Premier League. Villa lost to Southampton on Friday night and sacked their manager, Dean Smith, over Sunday lunch, dropping him like a cold Yorkshire pudding on the kitchen floor. Villa were supposed to have a strategy. Their chief exec, Christian Purslow, wearing a crisp white shirt and trust-me no tie, turned up in a video over summer to explain their strategy. Jack Grealish was going, so Villa strategised their way to a £100m release clause and a succession plan. “Our strategy was to analyse and break down Jack’s key attributes — his creativity, his assists and goals — and find those qualities and others in three forward players,” he said, and this they did. For eleven games. They won three drew one and lost seven, so now Dean Smith is sacked and it’s time for a new strategy, maybe to save the old strategy or maybe to replace it altogether.

See also the careful Norwich hierarchy, with their strategy of calmly investing Premier League revenue in training facilities to capitalise on status despite results. Until Saturday, when they grimaced through a victory that gave them a fighting chance of actually staying in the Premier League, but also gave Daniel Farke, the manager they’d decided to sack, a fighting chance of making them look foolish. Watford already sacked their manager but they do that all the time. It took Spurs ten games to realise their tenth choice coach was a bad idea. Newcastle were all in on Unai Emery last week until he found out about it. Even Leicester took the pitch at Elland Road amid reports their boss, Brendan Rodgers, has a ‘verbal agreement’ to take over at Old Trafford. The most bizarre thing about that is Ole Solskjaer’s mystifying job security, despite the Glazers becoming more sweat than hair.

Leeds United, meanwhile, home of the Cellino circus, the GFH ‘ganza, Bates’ bedlam and Ridsdalepalooza, presided over now by jump-tweeter Andrea Radrizzani and a coach who used to keep grenades by the door, is somehow the Premier League’s serene sane centre. Leeds have as much risk of failing as anybody else, but they’re opting for the marginal competitive gain of not setting their own shoes on fire.

These days Leeds confine their chaotic energy on the pitch. Up against the striking rage of Jamie Vardy, Diego Llorente’s first act in the game was to play him through on goal to make a chance for Lookman inside thirty seconds. Not so long ago Llorente would have made a great chairman at Elland Road. He set the tone for a frenzied first hour, the action only subsiding for brief spells when Leicester wrested some slo-mo control. United’s hectic barrage kept both team’s tempos up, Raphinha most of all in attack, Daniel James most of all in defence, carried out on Kasper Schmeichel’s little Scholes-tempting toes. Seeing space behind Leicester’s wing-backs, Leeds were incisive from their own half, finding City’s weak spots where Raphinha made them tremble. You could argue he overplayed his flicks, feints and nutmegs, only if he wasn’t so damn good at them, dangerous with them, and wonderful to watch. The opening goal was the most boring thing he did all game, swinging a free-kick cross inside the far post of dodgy ‘keeper Schmeichel, right in front of his ‘friends’ in the South Stand.

Goal of the day went to Harvey Barnes a hilarious number of seconds later. Maybe it was an unforgivable lapse of concentration from the kick-off, but honestly, once Soumaré’s header flicked the ball away from Stuart Dallas, it was all about Barnes and an exquisite curler into the very top corner. Barnes once ghosted out of a loan move to Leeds and revelled in scoring, but like that episode, he didn’t do much else to be proud of.

Leeds, by half-time, should have led. By full-time they should have led. They should have scored with something other than a cross! But James, Rodrigo and Jackie Harrison kept turning danger in the penalty area into danger in the Kop, where fans cowered from the pop art Nike Flights being pelted in their direction. The game went along according to an old Leeds script, almost. Liam Cooper tested Illan Meslier’s reflexes with a powerful backpass. He tested Vardy’s strength with some miscontrol and a bodyslam on the edge of the area. And Leeds conceded from a corner that Vardy flicked on to Ademola Lookman at the back post, the sort of demoralising set-piece nonsense always ready to puncture a good vibe at Elland Road, but thanks to Lookman’s hand and foot and VAR’s keen cameras, it was ruled out. Fortune was swinging for United, and the Foxes pulled their punches for the point.

Me? When the final whistle blew — halting a Leeds attack, obviously — I was ready for another hour of this game. “A very beautiful game to see,” said Bielsa, and the attraction wasn’t superficial, but something deep and rich, like inhaling an old velvet curtain in a secluded museum on a warm autumn day. The match was intense, serious, delightful and ridiculous. When Meslier dived at Youri Tielemans’ feet to bail Cooper out, they ended up wrapped around each other like a sailor’s complicated knot, and while my mind’s eye can see Cristiano Ronaldo trying to boot the ball out of his opponent’s grasp in a tantrum against Liverpool, here Meslier and Tielemans recognised their farcical situation was no good and had an earnest discussion resolving it. That was sort of the game. Not with a cliche about the spirit it was played in, but relish for the players’ commitment to their comedy.

How much of this came from Adam Forshaw in midfield? Carnage doesn’t seem like his thing. I imagine him born saying, ‘Ay lads, less juss carrrrrm it dahn yeah, nuthin siily la.’ He embodies restraint. But for two years, if there has been rage in him, it’s been a rage to pitch in to the chaos and be at one with the madness of playing for Leeds, to feel again the whip of backwash as players rush to and fro on the field. Marcelo Bielsa has wanted him there from the very start, sounded ecstatic to have him back, and maybe this is why: Bielsa knows Forshaw has the mad contrariness of spirit to stand firm in the gale, El Loco’s perfect representative in El Loco’s perfect foil.

Forshaw brought helpfulness that Leeds haven’t had this season. Mateusz Klich can provide it when he’s in form, appearing over his teammate’s shoulder like a shadow, ready for a pass out of trouble. But Klich hasn’t been in form, and Forshaw made his first league start in two years looking in the form of his life. Leeds could give him the ball and that was it. He was someone they could give the ball to. It’s underrated. Forshaw is more than that: like a statement of intent, he made his first play with a body swerve in the centre, drilling a pass to Rodrigo, but the clever possession and no look passing were flourishes. Forshaw took the ball whenever his team needed someone to give it to, two sane feet in the maelstrom.

At the time of writing Andrea Radrizzani has resisted sending any told-you-so tweets. Maybe even he knows that one swallow isn’t summer, and besides, it’s nearly winter and Leeds have only won twice. One good match does not prove that putting faith in Forshaw, when Conor Gallagher and Lewis O’Brien didn’t come, was the right strategy. But as panicking clubs bin their strategies up and down the Premier League, it’s a nice snapshot of what confidence and persistence can create. The Premier League’s boardrooms promote a veneer of business, but they’re more like theatres of destruction, never having a better idea than scrapping the last idea. Maybe believing in what you’ve built is a better way of building, or in Adam Forshaw’s case, rebuilding.