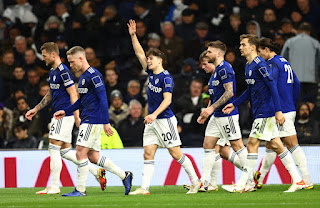 Tottenham 2-1 Leeds: Spurs came back from a goal down at the break to clinch a crucial three points and breathe life into their faltering season

As Tottenham trudged down the tunnel to a chorus of boos at half-time, Antonio Conte bowed his head and took a deep breath. He had spent the entire first half pointing and puffing, ranting and remonstrating, desperately trying to coax some intent – and basic coordination – from his players, who trailed Leeds by a goal and had failed to produce a shot on target in almost five hours.

The team talk Conte delivered in the dressing room, though, promises to be a decisive turning point in Spurs’ season. When they emerged for the second half, Tottenham were inspired and irrepressible as Pierre-Emile Hojbjerg’s equaliser ended their goal drought before Sergio Reguilon’s rebound sealed a hard-fought, helter-skelter but ultimately well-deserved 2-1 victory.

As the match drew to an end, Conte, perhaps still irked by the boos, turned to the crowd and theatrically demanded their voices. This victory was a source of both wild excitement and welcome relief to him. A match that had encompassed all Spurs’ familiar shades of grey – infuriatingly static and redolent of Nuno’s maligned incarnation – before bursting into the colours of the Italian’s trademark philosophy. It is an evolution in process, but one that unmistakably began here. Spurs are now seventh, just four points adrift of the top four, and can look up with intent rather than envy.

For all the expected fireworks of Conte’s first home league game in charge, though, Spurs’ start could hardly qualify even as a damp squib. Leeds might have been deprived of their talisman, the brilliant Raphinha, at late notice, but it was still they who possessed the far greater threat. Joe Gelhardt, the 19-year-old who’s shown a pathological tenacity for scoring at youth level, was cunning and persistent and Stuart Dallas came agonisingly close to firing Leeds ahead, his first-time strike from the edge of the box fizzing inches wide of the post.

Positivity in football is a fickle and fragile commodity. Quickly, the crowd’s optimism turned as cold as the evening air and discontent bubbled in its place as counter-attacks ground to uninspiring halts. Slowly but surely, though, Conte’s side were starting to find a rhythm. Kalvin Phillips, who was outstanding as a third centre-back, had marshalled Harry Kane like a personal bodyguard. But eventually, Kane slunk deep and found fresh air, forging Spurs’ first real opening. Soon afterwards, Son Heung-min burnt past three defenders on the break but Kane’s touch was clunky and the cut-back squirmed from underneath his feet.

Spurs’ chances had been few and far between and, on the brink of half-time, it was Leeds who bared their teeth and took first blood. Jack Harrison skipped past Emerson with a brilliant piece of skill, whipped a low ball across the face of goal, where Dan James stormed in and bundled home. It was nothing less than Leeds had deserved. They were slick, disciplined, unsparing and incisive – everything that defines Conte and yet, at that point, remained a figment of the imagination.

Malice must have surely laced Conte’s half-time speech, and Spurs finally showed some true attacking venom. Within 35 seconds of the restart, Kane was played clean through by Lucas and, even at an angle, the goal gaped, but Illan Meslier made a fine save to turn the ball onto the post. The wait for a shot on target was at least mercifully over.

Typically, from thereon, the chances followed in an avalanche. Minutes later, Son’s shot deflected off Diego Llorente and looped onto the crossbar. A tide of pressure had built, the breakthrough felt increasingly inevitable, and it arrived before long. As the loose ball ricocheted to Lucas at the byline, he spotted Hojbjerg lurking on the edge of the box, and the Dane’s mishit shot bobbled past a sprawled Meslier. In the technical area, it’s no understatement to suggest that Conte went utterly, mindlessly berserk.

Suddenly unburdened, Spurs surged forwards in unremitting waves and Leeds reeled into their shell. The change in intensity was overwhelming. Ben Davies’s forced Meslier into a point-blank save and had a penalty appeal ignored. Moments later, Adam Forshaw and Liam Cooper were booked for slightly desperate fouls and, from the latter, Eric Dier’s free-kick deflected against the post and was gratefully received by Reguilon, who beat every player to the rebound by several metres.

Still a precarious lead, Spurs showed little sign of squandering it. They rampaged forwards in pursuit of a third and Conte shadowed their every moment, pacing in his box like a seething animal. At the final whistle, his ecstatic release was granted. Spurs celebrated wildly, Conte embraced his players and staff, and the crowd roared with delight. This was the night when it felt like their new era had truly begun.