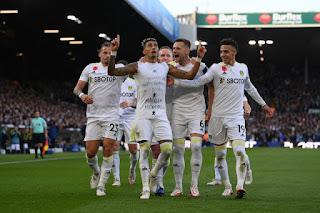 Leeds United's Brazilian international Raphinha is a force of nature, according to the man he tries to beat in training.

Premier League goalkeepers have not relished playing against the winger, who has fired in 11 goals in his 40 top flight games for the Whites since arriving from Rennes last October. Five of those goals have come in 10 outings this season, the 24-year-old leading Marcelo Bielsa's side in goalscoring.

His team-mate Illan Meslier loves what he sees on a daily basis when they face off at Thorp Arch, and what he observes from the opposite end of the pitch on matchdays.

The French Under 21 goalkeeper said: "Raphinha is an unbelievable player.

"I speak French with him, too. He's a good team-mate and honestly, every day it is a pleasure to train with him and to play with him. All the time he can make skills and shoot. Sometimes Raphinha is a storm.

Meslier and Raphinha are both in international duty during the current two-week break from Premier League action. The goalkeeper and his France Under 21 team-mates take on Armenia on Thursday evening in European Championship qualifying, before next week's trip to North Macedonia.

Raphinha, meanwhile, has been called up by Tite for Brazil's World Cup Qualifying games against Colombia, in the early hours of Friday morning, and Argentina next Tuesday.

The Leeds man made his international debut in October, playing in all three of Brazil's games and shining with a pair of goals and two assists.