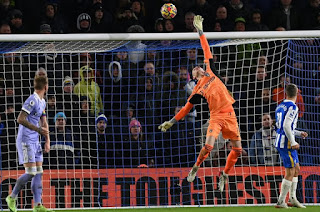 Brighton created a host of chances but paid the price for some wayward finishing as Leeds were also saved by the post three times.

The Seagulls squandered a fine chance in the fourth minute when the excellent Tariq Lamptey delivered a fine cross for Jakub Moder who smashed a vicious volley narrowly over the bar.

Junior Firpo was then booked in just the fifth minute for a late challenge on Lamptey and the Seagulls then missed a sitter in the eighth minute when Neal Maupay somehow skied a shot over from just six yards out after another Lamptey cross.

After a sluggish start, Leeds threatened to get their act together and saw claims for a penalty waved away after Leandro Trossard caught Raphinha with a high challenge just inside the box.

But Brighton were well on top and Trossard was denied by the frame of the goal in the 20th minute as Illan Meslier crucially got his fingertips to a raking drive that smashed off the post.

Leeds had earlier survived Brighton's claims for a penalty for claims that Liam Cooper had handballed and a Whites side who started out with a back three featuring Kalvin Phillips then reverted to a back four as Phillips moved into midfield.

Leeds then squandered a potential opening in the 26th minute when Dan James was unable to hook back a deflected Raphinha free kick at the far post.

But back came a dominant Brighton and Yves Bissouma skewed a shot wide before Trossard fired a firm shot straight at Meslier from the edge of the box.

The post then saved Leeds again as Moder's rising shot from a tight angle smacked back off the frame of the goal.

Yet another Brighton chance was missed in the 37th minute as Lamptey's cross picked out Maupay who sliced his shot wide from six yards out.

Another Brighton shout for a penalty was then ignored as Cooper's attempts to clear a cross bounced off his arm.

But Leeds somehow entered the half time break on level terms despite Brighton having 12 shots on goal, four of which were on target compared to United's four attempts, all of which failed to hit the mark.

Whites head coach Marcelo Bielsa then made a double change during the half time break as Phillips and Firpo were taken off for Pascal Struijk and Jamie Shackleton.

Brighton were immediately back on the attack after the break and Meslier saved from Trossard before Maupay sent the rebound over the bar although the whistle had gone for a foul on Shackleton.

United fired in their first shot on target in the 55th minute when a rising drive from Dallas from the edge of the box was beaten away by 'keeper Robert Sanchez.

Rodrigo then fired well wide and over from the edge of the area but Brighton were soon back on top and Meslier got away with spilling a cross before Trossard cut inside and fired wide.

Bielsa then made his third and final change in the 63rd minute but Joe Gelhardt stayed on the bench as Tyler Roberts instead replaced Jack Harrison.

The Brighton onslaught continued and a poor Shackleton back pass played in Moder who failed to convert and seconds later Moder fired another glorious chance over.

From a Leeds counter, Struijk's fine pass played in Roberts whose low shot from a tight angle was saved by Sanchez' feet but another Brighton chance was squandered with 15 minutes left when substitute Jurgen Locadia snatched at a shot that rolled back to Meslier.

Brighton's second substitute, Solly March, then cut inside and saw a fine effort tipped over the bar by Meslier but Roberts threatened for a second time with 12 minutes left when firing well wide.

Moments later, Roberts was played in and saw his shot across goal saved by Sanchez whose foot cleared the strike for a corner from which another deflected Roberts strike forced Sanchez into another excellent save.

But Brighton were denied by the frame of the goal for the third time in the 88th minute when a March effort squeezed past Meslier but trickled on to the post, Meslier gathering the rebound.