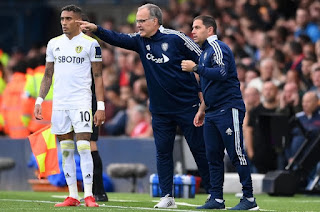 Marcelo Bielsa is happy with the way Raphinha is performing for Leeds United but has laid down a fresh challenge for the winger.

Speaking ahead of today's Whites' trip to Tottenham Hotspur Stadium to take on Antonio Conte's Spurs, Bielsa was asked how Raphinha could go to the next level.

Since his arrival in October 2020, the 24-year-old has shone for Bielsa in the Premier League and taken the step international football in his stride, scoring two goals and making two others in his first five appearances for Seleção.

In his first season at Elland Road his impact was hugely significant but the current campaign has seen him take on huge amounts of responsibility in Leeds' attack, particularly in the absence of Patrick Bamford.

With the centre forward still out through an ankle injury, Raphinha's offensive output will be key in a game against opposition of the calibre of Spurs.

To that end, Bielsa says Leeds have got to get the ball to him in the right area at the right time, but Raphinha's role in making that happen is also vital.

"More than what I do, it is what he does," said the head coach.

"Every player that has the capacity to unbalance individually, they have a consciousness of a different type of controlled receptions, from which they can compose themselves. The players that unbalance, what is most convenient for them, is to receive a lot of balls, doing it far away from the markers that they are up against, and to receive the ball more on the move rather than standing still and managing to take contact of the ball in spaces where the opponent doesn’t expect it. No player that unbalances ignores how to resolve these issues, to receive the ball in good conditions.

"As much as I would say that more than the power to eliminate players one v one, the virtue that allows them to shine is how they receive the ball.”

Bielsa has no concern that too much is being asked of Raphinha, who played for his country against Argentina in midweek and has started all but one of Leeds' Premier League games this season.

“Another characteristic of the elite players, is that they are ambitious and that the demands and the limits they put them themselves and they don’t need an external stimulus to want them to do this," he added.

As for room for improvement, Bielsa says there is some. While he's content with what he's getting from his right winger, the Argentine highlighted something great players do that, if Raphinha can do it, would benefit both the player and the entire team.

"If you asked me how do I imagine his evolution, I would say to maintain regularly performances like the ones he is achieving would be a great indicator and the other great challenge that the players that shine have is to transfer that evolution to his team mates and to the team.

"Raphinha will be a lot better if the team is better and if his team mates are better. This, what I say, is not a conclusion that is elaborated by myself but it is a conclusion that comes from the players that shine. They start by unbalancing by themselves, they manage to facilitate how their team mates performs and that development of the collective game improves the team that they belong to, that contains them and that process is a great challenge.”