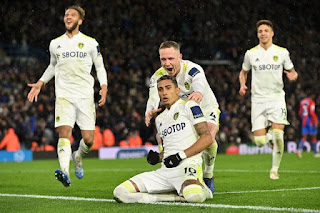 Three days after Saturday evening's goalless draw at Brighton, Leeds were heading for another 0-0 but the Whites were awarded a 91st-minute penalty after Marc Guehi blocked Liam Cooper's header from a corner with his arm.

After the intervention of VAR, referee Kevin Friend eventually pointed to the spot and Raphinha coolly converted to give Marcelo Bielsa's side their third win of the season, taking Leeds up to 15th and five points clear of the drop zone.

Leeds began brightly at a noisy Elland Road and Dan James saw two fierce shots blocked, the first of them after a good through ball from Tyler Roberts.

Raphinha then saw a curler from the edge of the box deflected over as United piled on the pressure, Raphinha then playing Stuart Dallas whose powerful low cross was scrambled clear.

Palace threatened through a counter in the 12th minute but Jordan Ayew saw his firm strike blocked by Dallas, shortly after United's fans had paid tribute to Gary Speed by chanting the Whites icon's name from the terraces.

But Leeds were well on top and a clever disguised effort from Adam Forshaw flew just wide in the 15th minute.

Palace wanted a penalty as Ayew went to ground under pressure from Pascal Struik shortly afterwards but play went on and Palace then came within inches of taking the lead moments later when a drive from Jeffrey Schlupp from the edge of the box flew just wide.

Back came Leeds and terrific perseverance from Kalvin Phillips took him into the Palace box, the England star then driving a shot just over.

The game then became a war of attrition in the driving rain and Palace captain Joel Ward was booked for hauling down Dan James in the middle of the park.

Former Whites target Conor Gallagher was then cautioned after flying into Raphinha and Pascal Struijk was carded just before the break despite winning the ball in an attempted tackle from the ground on Ayew.

Leeds then survived a couple of Palace corners as the first half ended goalless.

Whites head coach Marcelo Bielsa made a double change during the interval as Rodrigo and Junior Firpo were brought on for Matuesz Klich and Struijk.

Firpo was booked two minutes after coming on for clipping the heels of Ayew on the edge of the box.

Gallagher's free-kick hit the wall and Wilfried Zaha blazed the rebound over.

But Leeds squandered a brilliant chance in the 53rd minute when a brilliant pass from Raphinha released James who squared the ball to Rodrigo but the Spaniard could only slide the ball wide from close range.

Leeds began to turn the screw and a deflected Forshaw shot was saved by Vicente Guaita.

After two terrific tackles by James, Forshaw sent another effort over the bar.

Dallas was then carded for hauling down Zaha on the edge of the area and Palace missed a sitter in the 74th minute when substitute Christian Benteke put a free header wide at the far post from a Zaha cross.

Leeds responded and Firpo's cross was scrambled behind for a corner which led to two more that Palace cleared.

But only very alert goalkeeping from Illan Meslier saved the day moments later as the Frenchman turned on his heels to smother a prodded effort from Benteke on the line.

Benteke then drove forward in the 83rd minute but sent an effort wide and in the 89th minute a rising Roberts shot was easily saved by Guaita.

United looked destined for a second goalless draw in the space of three days but in the 91st minute a Cooper header from a corner was blocked by Guehi's arm.

Amidst furious shouts for a penalty, referee Kevin Friend was instructed by VAR to go and look at his monitor and after a couple of views, Friend returned to point to the spot.

Up stepped Raphinha who kissed the ball before placing it on the spot and the Brazilian produced a cool finish to slot home his effort into the right hand corner of the net.