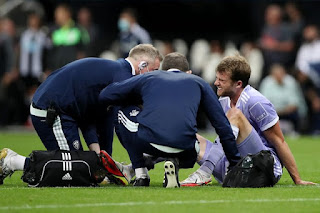 Leeds United head coach Marcelo Bielsa is likely to have Patrick Bamford and Luke Ayling available for the visit of Brentford on Sunday.

The pair made their long-awaited comeback from injury together on Monday at Manchester City with the Under 23s, who host Leicester City in Premier League 2 action tonight at York.

Bamford completed 90 minutes at the Etihad Campus earlier in the week on his return from ligament damage in his foot, while Ayling picked up 45 minutes following knee surgery.

Both players have been missing since the trip to Newcastle United in mid-September, when they each suffered a serious injury in Leeds' draw, but Bielsa hopes to have them among his options against the Bees.

"It's likely they'll be available for the game on Sunday," said Bielsa, who added that 'in principle' he is not looking to use the duo in the 23s fixture this evening.

Struijk was struggling with a hip injury as Leeds prepared for Brighton and was only fit for 45 minutes of action, coming on at the break for Kalvin Phillips. He then managed to start on Tuesday night against Crystal Palace but appeared to aggravate the problem and had to come off at the interval.

Struijk's injury coincided with the return from injury of Junior Firpo, however, who took up the left-back role Bielsa has recently entrusted to Struijk.

Leeds' only remaining long-term injury victim is German international Robin Koch. The centre-half played at Old Trafford on the opening day of the season but has not been seen in action since having struggled with a pelvic issue that eventually required surgery. Leeds recently released video footage of Koch back on the grass training at Thorp Arch.