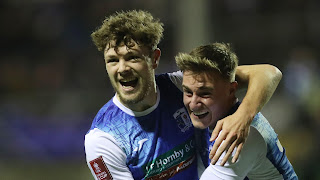 It’s never nice to think about Marcelo Bielsa being unhappy, even if there are times when it feels like he prefers suffering for his work to enjoying it. Given Bielsa once said, “Joy after winning only lasts five minutes, then there is a huge void and a loneliness that is hard to describe,” I daren’t try to imagine how he was feeling after Leeds lost 7-0 at Manchester City on Tuesday. Hopefully news of Barrow’s 2-0 victory over Ipswich in the FA Cup the next night allowed Bielsa the slightest glimmer of a smile.

Despite Leeds’ record in the competition, Bielsa loves the FA Cup. “It represents English football in its purest form. It allows you to link with the history of the clubs in England,” he said last season, right before Leeds experienced the purity of losing 3-0 to a League Two team fielding a reality TV star. Bielsa also loves watching young players being given an opportunity to realise their potential, describing the summer exits of Robbie Gotts and Jordan Stevens on permanent transfers to Barrow as “a failure of my job”, given the promise they offered on the fringes of the first team failed to translate into an established place in the senior squad.

Barrow’s win over Ipswich won’t have passed Bielsa by, because he’s Bielsa and nothing does. There was Gotts, perfecting a corner routine devised on the training ground the previous day, cutting the ball back to the edge of the box for Stevens’ shot to deflect into Ipswich’s goal. Stevens tried to return the favour by crossing from the right wing, only for Gotts to shoot over the bar, before once again they worked together in tandem to provide Barrow’s second, Gotts atoning for his miss by eventually converting after two teammates failed to take advantage of another Stevens cross. Completing the Leeds United family feel, Simon Grayson’s son Joe was playing in Barrow’s defence, while Ipswich were managed by Mark ‘son of Terry’ Cooper.

One of the highlights of both Gotts’ and Stevens’ spells at Leeds came at Emirates in our FA Cup defeat of the promotion season, as Bielsa’s second string made Arsenal hilariously dizzy in the first half. For Gotts, it was particularly sweet, making his debut a start after sitting on the bench for 35 games as an unused substitute. Both will have wanted more opportunities at Leeds, but didn’t look like they had many regrets when they were recreating Gary Speed and David Batty’s perfectly captured hug, excited by the potential glory of a third round tie at Barnsley.

Gotts in particular seemed to win a unique place in Bielsa’s heart with his persistence in the face of a thankless task. With numerous senior options ahead of him in midfield, Bielsa described his situation as “unfair”. “Gotts is in a special situation because he got a lot less than what he deserves,” he said a month before finally giving Robbie his debut. As Bielsa was pondering how to recover from Tuesday night, maybe two of his former academy players helped remind him of the lesson he subsequently preached in his pre-Arsenal press conference this week: “Upon adversity, you always have to fight.”