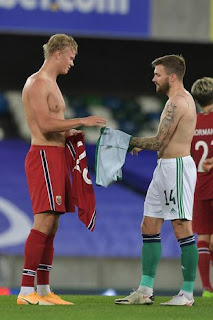 Erling Haaland is known for being a Leeds fan, but it has emerged the Norwegian very nearly joined the club as a 17-year-old, before Mino Raiola stepped in to block the move

It's well documented that Erling Haaland is in fact a fan of Leeds United, but the generational talent almost ended up playing his football at Elland Road before he was snapped up by Red Bull Salzburg.

Haaland may be a household name now, but as a 17-year-old star playing for Norwegian side Molde, the forward was just on the cusp of becoming well known, and Leeds did their best to sign him.

Salzburg ended up being his next destination though, and a move to Borussia Dortmund followed and the rest is history, but things could have been very different for Haaland and for Leeds.

Haaland was born in Leeds as his father, Alfi-Inge, was currently playing for the Peacocks at the time, and according to agent Hayden Evans, the forward was very close to following in is father's footsteps.

The Norwegian has been extremely vocal about his love for Leeds, swapping shirts with Northern Ireland's Stuart Dallas on international duty and being regularly seen in merchandise for the Yorkshire club, but according to Evans, Haaland was very close to becoming much more than just a fan.

Evans explained the story of how Leeds tried to sign Haaland on The Athletic's 'The Phil Hay Show', and said: "He was at Molde, around about 17 [years old], and he was ripping it up but also fervently following Leeds United.

"We spoke to Victor [Orta, Leeds' sporting director] and said, 'Look, I can bring Erling to Leeds and the rest will be over to you'. The best proof you can have [that a player wants to join] is to physically bring a player into the club, so we said we can do that.

"We brought Alfie and Erling over to stay at Oulton Hall, which had been like a second home for Alfie when he first came to Leeds. We got them in, we're talking about Leeds United, took him to meet Victor, [and] Victor already had the Leeds United shirt already made up with 'Haaland' on the back.

"What was impressive about them at the time was he said, 'Let's go to the training ground, that's what the boy wants to see. Elland Road is Elland Road, he loves it - he's a Leeds United fan - but as a footballer we want to talk football.'

"It was seen as just a step too far for a player at that time who would only play [for the] under-23s, so we were back at Oulton Hall, it was all okay, [but then] Alfie opened up and said, 'I'll be honest with you, next week we're going to Juventus, who want him.'

"Victor being Victor thought there's a way around this - he would contact Juventus because he knew the guys there and do a deal with them where he would be loaned back to Leeds, developed at Leeds United, with an option [to buy] him and all that, but it never quite worked.

"At Christmas time, [Leeds] played QPR away and - it was around his birthday or Christmas - he wanted, as his present, to be with the Leeds United fans in the stand behind the goal, and that actually happened.

"[There was ] a lot of truth about everything that went on and unfortunately then money talked. [Mino] Raiola came in and made the family a massive offer because he had a whole track of future transfers, clubs ready for everybody to earn fortunes with, and the rest is history."

Of course, everything happens for a reason, and certainly for Haaland's career it couldn't have gone much better for the Norwegian so far.

However, the £4m stumbling block has proven to be a major error of misjudgement, as Haaland will now be wanted by all of Europe's elite, with a reported £68m release clause set to kick in this summer at Dortmund.

Haaland still may get his wish to play at Elland Road, but it's more than likely it will be on the opposition side, with Manchester United, Manchester City, Liverpool and Chelsea all circling the Norwegian ahead of next summer.