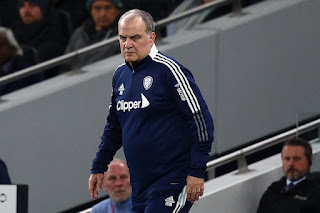 Robin Koch has also been ill having overcome his pelvic injury and Leeds will now face three of the Premier League's top seven over the next 16 days including all of the division's top three.

United are as big as 12-1 to win at today's title-chasing hosts Chelsea but Bielsa has seen signs of difficult circumstances bringing out a strong reaction from his Whites, particularly faced with consecutive tests against some of the best teams in the world.

"I always think that adversity is a stimulant to create or resolve situations," said United's head coach.

"I understand that there’s a certain pessimism because the upcoming games are difficult.

"Instead of bringing back players, we are creating new absentees.

"But when we play against big teams, I think that there’s an added strength.

"It comes from when the supposed weak one has the opportunity to win against a team which, before playing them, is better.

"Football has that thing which is so attractive.

"It allows for the hopes, for the fantasy that contradicts the logical reason.

"So my position is one of optimism and fortitude. And it’s not a position that’s just individual.

"It’s the conclusions that I make by evaluating the mood of the team.

"I understand that in adversity, one of the responses could be fatalism. But there’s another option.

"That is the optimism, the hope, and the fight. I never say we are going to win.

"I always say that we are going to do our utmost to deserve to win."