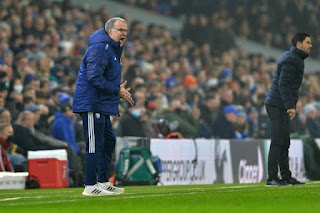 Marcelo Bielsa was moved by a show of support from Leeds United fans despite another heavy defeat, this time at the hands of Arsenal.

His Whites, missing 10 players through injury, suspension and illness, were 3-0 down at the break and staring down the barrel of a loss as humiliating as the 7-0 beating they sustained at Manchester City in midweek. An improved second half, albeit with the Gunners appearing to ease off and sit back more.

A Raphinha penalty cut the deficit but Leeds conceded again in the final minutes to lose 4-1. That goal, from Emile Smith Rowe, did little to lessen the noise inside Elland Road however as home fans stood to their feet and defied their team's current run of form to show their backing for Bielsa and his players.

"In the times now it is very difficult for something like that to happen," said the head coach.

"When I say now, I mean the excitism because in this case any claim from the fans would be justified. To not let go of the hand of the team you love is very, very big. Always the support like the team received today is a stimulus. It's not easy when a team has conceded 11 goals in two games, or 14 in three games. It generated the support that was so moving for the team."

Bielsa again refused to make an excuse of the injury crisis that has engulfed his side. Key players like Kalvin Phillips, Patrick Bamford and Liam Cooper are among an extensive list of absentees for the only game to survive as Covid-19 outbreaks forced the postponement of the rest of Saturday's fixtures.

Charlie Cresswell' s shoulder injury, sustained on Thursday, and Diego Llorente's bout of illness, suspected to be Covid-19, were additional problems for Bielsa to deal with in the final preparations for Arsenal. He did not at any stage contemplate that the game should be called off.

"To the series of injuries we added Cresswell who picked up an injury in his shoulder and Llorente due to illness," he said.

"The rules don't contemplate the amount of injuries for a game to be suspended. Even if we had 10 players less, one was through suspension, one illness and the rest through injury."

A tough one to take #lufc https://t.co/fW6TSfB0lY

Jack Harrison went off in the first half with what Bielsa described as a painful knock below his hip, by which time Leeds were already well on their way to defeat.

When they lost the ball they looked far too open defensively and the Gunners cut through them with ease.

"In that sense in the first half we didn't manage to resolve this and there were more chances generated than the goals they scored. In the second half was improved the recovery of the ball. We never managed to get them to make mistakes at the height of their defenders and their defensive mids. Our offensive powers didn't count on that advantage of recovering the ball in the opponents' half. In the first half and second half we made a lot of effort so their forwards didn't receive the ball comfortably, and even if they didn't make mistakes, their forwards didn't receive balls that were too clear. When we lost the ball in our own half, just before the middle of the pitch, this increased their possibilities."

The result made it three league defeats on the spin for Bielsa for the first time since he arrived at Leeds. They will need to show strong character to come through it and he believes he's seeing that in his players.

"You have to have a tolerance to the frustration," he said.

"You have to be very convinced in a big way of where you are going to absorb these types of moments. There are examples that have a lot of value. For example, today Koch competes again after four months out. Our participation didn't find him in the best start but he chose to play and the game didn't overcome him. If you look at the case of Dallas, he received a lot of knocks today. He finished the game like Raphinha. The efforts that Gelhardt made today are above his possibilities at the moment. The players have to accelerate the development quicker."